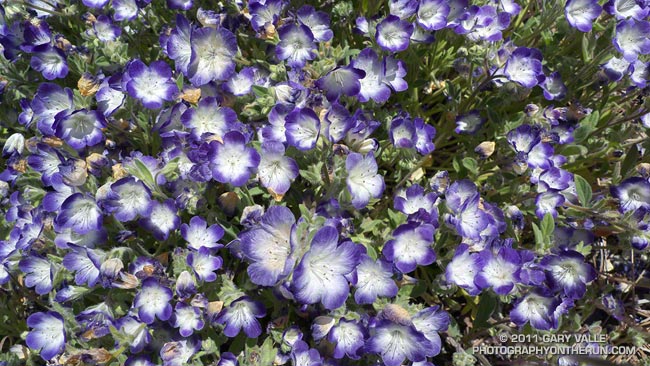 Various species of Phacelia are fire-followers and have bloomed in profusion in areas burned by the Station Fire. These are Davidson’s Phacelia (Phacelia davidsonii) along the Three Points – Mt. Waterman Trail about a mile from Three Points.

Like Turricula (Poodle-dog bush)*, many species of Phacelia can cause a contact dermatitis similar to poison oak. Generally, any Phacelia should be considered suspect, and especially those that are fuzzy and sticky.

One Phacelia that has been shown to elicit a reaction is California bluebell (Phacelia minor) — a relatively common wildflower in the middle to lower elevation areas burned by the Station Fire. In one study, it was found that the amount of two active compounds in Phacelia minor required to produce a qualified reaction was 6.3 µg and 3.8 µg; compared to 170 µg for Turricula and 1.6 µg for a component of urushiol from poison ivy.