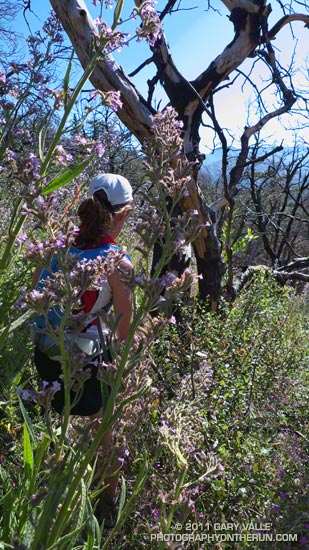 In a real-world test of Poodle-dog bush* exposure, during a recent training run at Mt. Wilson approximately 30 runners ran a mile-plus section of trail overgrown with the plant. Reactions varied from none at all, to at least one runner who had a strong reaction similar to my first bout with Poodle-dog bush several weeks ago.

Here are some runner comments:

“I can’t believe it, but I had very little reaction. Just a few little bumps. You saw how careful I was trying to be. Maybe not man-handling it helps.”

“Not much sleep for the last two days…arms, legs, and abdomen burn way worse than Poison Oak. By nightfall the blisters break and ooze.”

“I finally had a mild reaction today, red rashes that turned into very small blisters…”

“Absolutely nothing happened, I’m either not allergic to it, or the soap & brush took the top layers of skin off and the poison with it.”

“I’ve got the stuff in my left eyelid (I must have rubbed my eye after hand contact with T. while carefully trying to part it as I inched my way down VF); I’ve got it on my stomach at waist band and lower, and I’m waiting for my legs, although I may get lucky there.”

Since I’d had a strong reaction before, I expected the worst. Fortunately my reaction was relatively minor. Like several other runners, I had a same-day irritation/inflammation along the waistband of my running shorts. In addition the top of one ankle and a small area on the inside of one arm developed a very mild rash. It was barely noticeable, and cleared up completely in about five days.

There are several possible reasons I didn’t have a strong reaction this time. Even though contact was unavoidable, I walked in areas where the Poodle-dog bush was the most dense, and I attempted to avoid the plant as much as possible. This time around my legs and arms were not covered with the sticky goo from the plant. Even so, as soon as I was out of the area with Poodle-dog bush, I stopped at a creek and washed off my legs and arms. I also washed again at the end of the run.

Another reason I might have reacted differently is the age of the plants. As Poodle-dog bush matures, the lower leaves wither and fall. (This gives the plant the appearance of the groomed tail of a poodle.) There’s anecdotal evidence that as the plant dries out the almost microscopic hairs that cover the leaves, stems and flowers are easily broken and shed, and can contribute to the irritation/inflammation the plant causes. It seems plausible that these hairs could be an irritant, or might even act like a minuscule time-release capsule of the plant’s active compounds.

Note: The trail was the Valley Forge Trail. Trail work is scheduled on this trail the next two weekends.