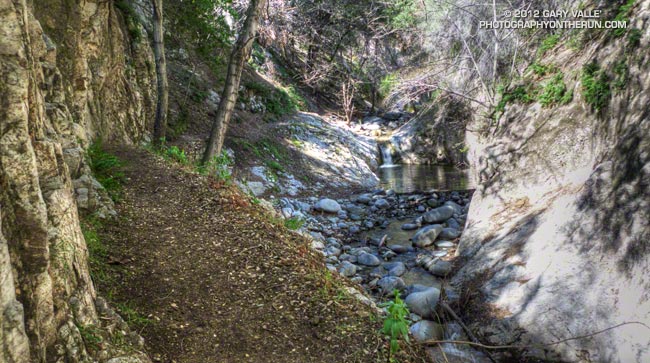 By the calendar Spring was still a couple weeks away, but temps near 80 were forecast for the lower elevations of the San Gabriel Mountains and the weather looked ideal for revisiting the Red Box – Bear Canyon – Gabrielino loop in Angeles National Forest. I did this loop last May when the area re-opened following the Station Fire and was curious to see how recovery was progressing, and how much trail use and maintenance had improved the trails.

The difference in 10 months was remarkable. Recovery of the burned areas continues at a steady pace, and trail conditions on much of the loop are not all that different than before the Station Fire. Following are some notes about each segment of the loop.

San Gabriel Peak Trail to Mt. Disappointment Road: This trail segment was not burned in the Station Fire and is in good shape. The weather had been much colder earlier in the week and there was still some snow on the trail from a mid-week storm.

San Gabriel Peak Trail from Mt. Disappointment Road to Mt. Lowe Truck Trail fire road: Thanks to work done by the JPL Trailbuilders this segment was in decent shape last year, and was in even better shape today. It’s rough and rocky in places, and there’s still some Turricula along the trail, but it was very runnable and not unlike it was before the fire. There are excellent views of Mt. Markham, Mt. Lowe, upper Bear Canyon and the rugged terrain along Mt. Lowe Truck Trail fire road.

Mt. Lowe Truck Trail fire road to Upper Bear Canyon Trail: Other than some rock fall here and there, there were no particular issues from a trail running point of view. There are good views of San Gabriel Peak, Mt. Disappointment and Bear Canyon.

Cabin site to Bear Canyon Camp: Increased use made it easier to follow the use trail and work down the canyon. The collapse of this unburned oak may not have been related to the fire. Bear Canyon Camp is about halfway through the canyon, above the creek on a bench on the left (when descending). The camp is in great shape, and from its shaded sites it would be hard to tell a fire had ravaged the area. At the edge of the camp is an old Forest Service sign, placed by someone with a sardonic wit.

Bear Canyon Camp to confluence with Arroyo Seco: This segment has seen much more use — as I descended the canyon I encountered four groups and two solo hikers working up the canyon. There were a number of ribbons and ducks marking the way and the use trail is becoming better defined. Although some nice sections of the old trail remain, most of the trail in Bear Canyon was washed out well before the Station Fire. As noted by John Robinson in Trails of the Angeles, “…the old Tom Sloan Trail that once traveled the length of the canyon is in poor shape and you must scramble and boulder-hop much of the way.” This is part of the Bear Canyon experience and hopefully the path won’t become so well-marked that all you have to do is blindly follow the markers.

Arroyo Seco to Gabrielino Trail and Switzer Picnic Area: Very well-used. Its condition is similar to what it was before the Station Fire. I was surprised to see two people on mountain bikes descending the steep section of trail that leads to the Arroyo Seco below Switzer Falls, and then downstream Bear Canyon junction and Royal Gorge. I wondered if they had missed the fork onto the Gabrielino Trail. If they were the mountain bikers that were later rescued at the Paul Little debris dam, and didn’t backtrack to the Gabrielino Trail, they would have had a nightmare of a hike-a-bike through trailless Royal Gorge.

Gabrielino Trail from Switzer Picnic Area to Red Box: Last year the condition of this trail segment was the worst of any trail on the loop. It was washed out in several places. There were downed trees. Some sections were so overgrown it was difficult to follow the trail. In several places I had to literally wade through chest high Turricula. Not so this year. Thanks to the efforts of CORBA and MWBA this trail has nearly been restored to the condition it was in prior to the Station Fire. Other than dealing with the uphills I had no problem running the trail. There’s still a lot of Turricula along the trail, but it is mostly avoidable.

Last year on this loop there was no avoiding the Turricula and I paid the price, its sticky resin coating my arms and legs and resulting in a rash and inflammation. This year I only contracted a couple of small spots of poison oak. This post has more info about Turricula.

The Forest can be a hazardous place, but there were washouts, rock slides, downed trees, overgrown trails, lost hikers and other incidents BEFORE the Station Fire. Just because an incident occurs in the area burned by the Station Fire doesn’t mean it’s the result of the fire.

*Tom Sloan appears to be correct spelling, rather than Tom Sloane as printed on some USGS maps. In Trails of the Angeles John Robinson mentions that Tom Sloan Saddle is named after a former district ranger. There’s a quotation from the Arcadia Tribune (1918) on the Forest Lookouts page for Los Angeles County regarding Arcadia Station that refers to “Thomas W. Sloan, chief ranger in the United States Forest Service in this district…”