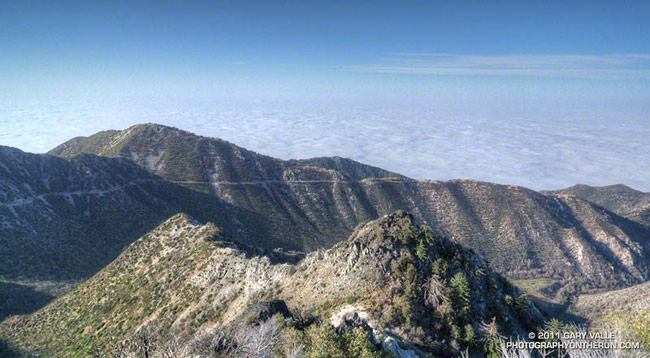 A run or hike doesn’t have to be long or difficult to be enjoyable! It had been a while since I’d done San Gabriel Peak, Mt. Markham, and Mt. Lowe; and although I’d run within a quarter-mile of the summit of Mt. Disappointment several times, I’d never done the last bit up to the peak. All four of these peaks can be done in a (round trip) run/hike of less than ten miles, with a cumulative elevation gain/loss of around 3000′.

Depending on where you prefer to park, the run/hike can start at the San Gabriel Peak Trail trailhead, which is about one-third of a mile up the Mt. Wilson Road, or at Red Box on Angeles Crest Highway. Parking at Red Box requires running/hiking on Mt. Wilson Road to the trailhead.

In Trails of the Angeles, John Robinson describes how government surveyors lugged their equipment to the top of Mt. Disappointment in 1875, only to discover that another peak to the southeast was higher. That peak was San Gabriel Peak. Except for Strawberry Peak (6164′), San Gabriel Peak (6161′) is the highest of the front range peaks. It is the most prominent peak on the eastern skyline when viewed from the San Fernando Valley, and is sometimes mistaken for Mt. Wilson.

After enjoying the panoramic view from the top of San Gabriel Peak (~ Mile 2.9), I retraced my steps back down to the “main” trail and continued to descend to Markham Saddle and the Mt. Lowe fire road. At this point another trail begins on the Mt. Markham side of the road. This trail leads southwest to a saddle between Mt. Markham and Mt. Lowe. Mt. Lowe Road is closed between Markham Saddle and Eaton Saddle because an active rock slide destroyed the road just west of Mueller Tunnel.

From the Markham-Lowe saddle a path follows the southwest ridge of Mt. Markham about a half-mile to its summit. The route up the ridge is relatively straightforward, but a steeper section requires a little scrambling over fractured, loose rock. The high point on Mt. Markham’s elongated summit ridge appeared to be a pile of rocks covered with Turricula. A little further out on the ridge was a clearing with a rusty can that may have been a summit register (~ Mile 5.1).

Returning to the Markham-Lowe saddle, less than a half-mile of moderate uphill led to the summit of Mt. Lowe (~ Mile 6.0). There’s a bench here, along with locating tubes pointed at various landmarks. As explained by the interpretive sign on the peak, Professor Thaddeus Lowe had planned to build a large hotel on the summit, serviced by the Mt. Lowe Railway. In his grand vision, a suspended cable car would have continued to San Gabriel Peak, where an observatory was to be built. Here’s a map of Mt. Lowe area trails and landmarks created by The Scenic Mt. Lowe Railway Historical Committee.

It was on the way back, near Mt. Disappointment, that I heard and saw the F-18s described in So Many Heroes. It turns out the fighters had done a flyover as part of a 9/11 Memorial dedication in Pasadena.

Turricula was present virtually everywhere along the route that had been burned, and could not entirely be avoided. It was especially prevalent on the path to summit of Mt. Markham from the Markham-Lowe Saddle.

I’ve been exposed to Turricula now on a number of runs, and except for the first time, when I literally waded through unbroken stands of the sticky young plants, it hasn’t been a problem — even wearing running shorts and short-sleeves. I’ve had a little irritation on my ankles, or sometimes along my waistband, or a random spot here or there, but it’s been no big deal. Certainly nothing like the widespread inflammation, swelling and blisters the first time!

Of course now I at least make an attempt to avoid the plants. And I also wash off my arms and legs at the earliest opportunity after being exposed to Turricula.

It also seems the older plants don’t have as much of the “exudate” on them, since my legs and arms haven’t become sticky from brushing up against the plants. Anecdotal evidence suggests that in the older plants irritation results from the almost microscopic hairs on the plant. It is thought these irritating hairs are more easily broken and shed as the plant ages.