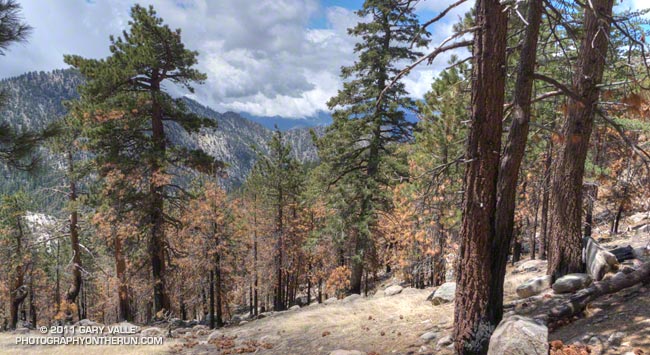 Scorched Jeffrey Pines on the South Side of Waterman Mountain

It was very odd to run up the Mt. Waterman Trail on the Sunday of a 3-day Memorial Day weekend, and see no one. And hear nothing, except the wind in the trees, the distant call of a jay, and the periodic drone of a contractor’s truck working on the highway. That’s because — surprise, surprise — Angeles Crest Highway was closed a little east of Three Points and on to Islip Saddle. CalTrans Road Conditions had only listed the Winter closure from Islip Saddle to Vincent Gap. Based on the number of cars parked at the closure, not many people knew about it.

I hadn’t known about it until I saw the Ranger’s truck and closed gate from the Pacific Crest Trail. I was doing a loop from Three Points up the PCT to the Burkhart Trail, then up to Buckhorn, over Mt. Waterman, and back down to Three Points. Part of this loop — from Mt. Waterman to Three Points on Trail 10W04 — had just reopened, and like last weekend I wanted to see how recovery from the 2009 Station Fire was progressing.

The conditions were much better on this loop, than last week’s. Although within the initial Station Fire Closure area, and closed for eight months, 11 of the first 13.5 miles of the loop were not burned in the Station Fire. This mostly unburned stretch opened in late May 2010 and is described in the post Three Points to Waterman Mountain, the Long Way.

The remaining six miles of the loop, which winds in and out of the shallow canyons on the south side of Mt. Waterman, was in the burn area. Conditions along the trail appeared to generally correspond to BAER burn severity maps and images. At the higher elevations, fingers of the fire had run up the steep slopes, burning understory and scattered Jeffrey pines and incense cedars, while leaving other areas untouched.

At lower elevation, particularly in the chaparral and pine at the head of the north branch of Devils Canyon, the fire effects were more severe. The chaparral is recovering, but numerous Coulter and Jeffrey pines appeared to have been killed, and their replacement will be a slower process. This area is traversed by the last two miles of Trail 10W04, leading to Three Points.

There was very little, if any, damage from runoff and the trail was generally in good shape. The trail was slightly overgrown in spots, particularly at lower elevation, but was nothing like the Gabrielino Trail between Switzer and Red Box. There was some Turricula (Poodle-dog bush) at lower elevation, but for the most part it was fairly easy to avoid. Some pine needle covered sections of trail were indistinct, but it was like that before the fire.

From a trail running perspective, it is still a very “runnable” course with varied terrain and much to see and enjoy. Cooper Canyon Falls is very short side trip from the PCT’s junction with the Burkhart Trail. The side trip to the summit of Mt. Waterman (8038′) adds about two miles to the loop.