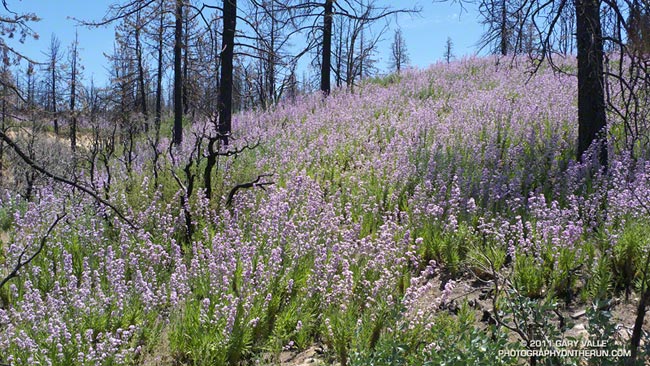 It’s been several weeks now since my bout of contact dermatitis from Turricula (aka Poodle-dog bush)*. The dermatitis was much better after a week, but took about two weeks to completely go away. I’ve heard this is typical, and several people commented that their Turricula experience was similar to mine.

Update July 12, 2011. A running friend who recently did some trail work removing Turricula on the Kenyon Devore Trail sent this photograph of a blotchy red rash that developed on his forearm. He first noticed a reaction four days after doing the trail work, and the photograph was taken 10 days after exposure. As in my case, several hours later he commented that the blotchy rash had merged into a more general inflammation with swelling.

The other day I was asked if I’d rather have dermatitis from poison oak or Turricula. The reactions are so different, they are hard to compare. Plus, my exposure to Turricula was probably a worst case scenario. It was as if the goo from the plant was painted on my arms and legs with a brush, and left to cure. I’m guessing that an equivalent exposure to poison oak would have been much, much worse.
I was a little worried that the extreme exposure to Turricula might make me hypersensitive to it, but that doesn’t appear to be the case. About a week after recovering from the dermatitis, I did some trailwork with a group that cleared a section of overgrown trail in Shortcut Canyon. Not only was there Turricula, but poison oak and stinging nettle as well. With normal precautions — long pants, long sleeves & gloves — I didn’t have a problem.
As long as you don’t have to wade through it, the oceans of violet flowered Turricula in the Station Fire burn area are striking. I’ve heard Turricula described as an invasive plant. While it is an unbelievably prolific fire-follower that seems to invade an area after a fire, it is a native California plant. Given just how prevalent it is after a fire, it probably plays a key role in the recovery process, perhaps helping to restore the chemical balance of the soil, as well as providing mulch.