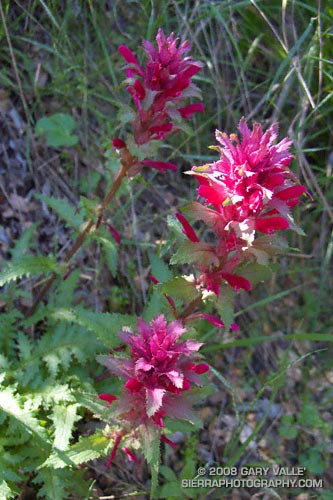 Indian warrior’s varying tones of carmine contrast sharply with its lush green leaves and create a striking combination of colors when seen along a trail. Surprisingly, it is the green of its leaves that is one of its interesting features.

Indian warrior (Pedicularis densiflora) resembles two other wildflowers you might see along a Southern California trail — Indian paintbrush (Castilleja affinis) and Owl’s clover (Castilleja exserta). All three are related root parasites that obtain water and nutrients from their host, but also contain chlorophyll and can photosynthesize carbohydrates.

It seems this characteristic would be of value in a climate where seasonal rainfall is highly variable, extending the parasitic plant’s access to water.

Recent genetic analysis has revealed that Pedicularis and Castilleja are related to plants in the Broomrape family (Orobanchaceae), rather than those in the Figwort family (Scrophulariaceae), in which they have been classified. This was a somewhat unexpected result because one of the distinguishing characteristics of Orobanchaceae had been the lack of chlorophyll.

The photograph was taken on the Backbone Trail on the run described in A Long Run Kind of Day.

The Physiology of Plants Under Stress By Erik T. Nilsen, David M. Orcutt