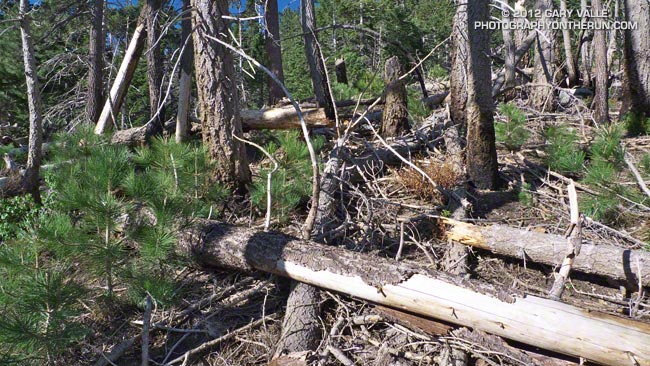 The photograph above is of an area on the Pacific Crest Trail near Mt. Islip that was burned ten years ago in the 2002 Curve Fire. Here’s another photograph of an area along the PCT near Throop Peak that was also burned in the Curve Fire. These are from last weekend’s trail run.

The forest conditions are quite a bit different in each case. The Mt. Islip trees are on a cooler northeast-facing slope that was densely forested, and the Throop Peak trees are on a warmer, more open, south-facing slope. But in both cases you can see numerous pines, from small seedlings to young trees two to three feet tall.

Reforestation doesn’t happen overnight, but nature is remarkably resilient, and as long as an area is not burned too frequently, many forests are able to recover from fire with minimal intervention.

However, the process of recovery is multi-faceted and complex. It may involve varying degrees of regrowth and succession. In some cases, such as in the blast zone of Mt. St. Helens, the ecosystem has to be effectively bootstrapped, and seemingly restored from scratch.

Ultimately the mature forest that results from these processes will be comprised of an ecosystem — and vegetation — suitable for the array of climatic and other factors present at the time.

Attempts to shortcut this process are not often successful — such as the recent attempt to plant nearly one million seedlings in the Station Fire burn area. An Angeles National Forest official is quoted in an April 7, 2012 Los Angeles Times story as saying, “When we planted seedlings, conditions were ideal in terms of soil composition and temperature, rainfall and weather trends.” Beyond the criticisms outlined in the story did anyone in the Forest Service consider that La Nina conditions were present, and there was a good chance La Nina conditions would be present during the 2011-2012 rain season — along with a likelihood of below normal precipitation?