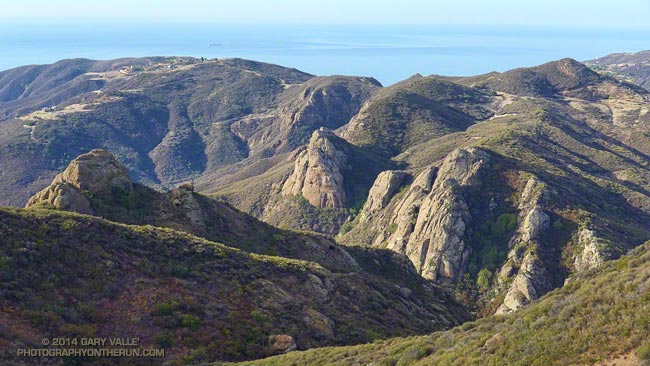 The Coyote Backbone Trail Ultra was one of the most enjoyable runs I did last year. The low key approach with the emphasis on the experience rather than the clock was the perfect fit for my first 100K+ run. To be able to run the entire Backbone Trail with great support, company and entertainment was fantastic.

Today’s run — the second of four 2014 Backbone Ultra training runs — was from Kanan Road to the Mishe Mokwa trailhead near Circle X. This approximately 15 mile segment is one of the most scenic on the Backbone Trail with expansive views and superlative sections of single track trail. The 850′ climb from Encinal Canyon to Etz Meloy Motorway is so well-graded you (almost) don’t realize you’re gaining elevation.

I was looking to get in some extra mileage and it turned out running cohort Ann Ongena was as well. Ann was marking the course for the training run, so the plan was to do the Kanan to Mishe Mokwa segment and then continue from Mishe Mokwa another 13 miles or so to the Wendy Drive trailhead in Newbury Park.

A little before dawn Backbone Ultra RD Howard Cohen dropped us off at the Kanan Road trailhead and then headed back to Mishe Mokwa to coordinate the training run. The temp at the trailhead was around 60 degrees, which is about 30 degrees warmer than last year’s frosty training run on this segment.

For some reason my GPS watch was a little slow to sync with the satellites, and while I waited Ann was already busy on the trail. Course markings don’t have to be numerous or obtrusive to be effective. The few markers she would place would be removed by Tres when he swept the course.

The run from Kanan to Mishe Mokwa went well. As has been the case too often this Winter, the weather was nearly ideal for running. Last year at this time Downtown Los Angeles had recorded 4.35 inches of rain for the water year (since July 1). That was well below average. This water year to date we’ve only recorded 0.97 inch of rain — a meager amount and less than in the record driest water year of 2006-2007.

On this run and all the runs I’ve been doing this Winter I’ve been looking at how the chaparral plants deal with drought. Generally, they reduce their water needs by not flowering, remaining dormant, dropping leaves, producing much smaller leaves, folding or rolling their leaves and in other ways. Some annuals simply don’t germinate. Some plants such as chamise, with its needle-like leaves, deal with drought well; others such as bush monkeyflower are barely recognizable.

I didn’t hear any shouts from Mishe Mokwa this morning, but the thought made me smile. Overhead the layer of clouds which had been with us most of the morning was beginning to dissipate, and the temperature was beginning to climb. Across the valley Boney Mountain’s iconic rock formations stood in relief against a mackerel sky and I stopped a couple of times to photograph the scene.

At Mishe Mokwa we enjoyed the fare at Howard’s & Victoria’s rolling aid station and relaxed for a few minutes as a large group of hikers assembled and then started up the trail.

When marking a course it’s preferable that when the main group finishes the run the course-markers be comfortably ensconced in folding lounge chairs, an IPA in hand, sweat-free and looking as they have been there for hours. With more miles to cover I substituted a soda for the IPA and after about 10 leisurely minutes we followed in the hiker’s footsteps and continued up the Backbone Trail to a busy Sandstone Peak — the highest peak in the Santa Monica Mountains.

After spending a few minutes on the summit of the popular peak we worked over to the west junction of the Tri Peaks Trail, then down the Chamberlain, Old Boney and Blue Canyon trails to Sycamore Canyon. Here we left the Backbone Trail and enjoyed a little easy running up Sycamore Canyon to the Upper Sycamore Trail. Upper Sycamore ends at Danielson Road, which we followed to Satwiwa and trails that connect to Wendy Drive.