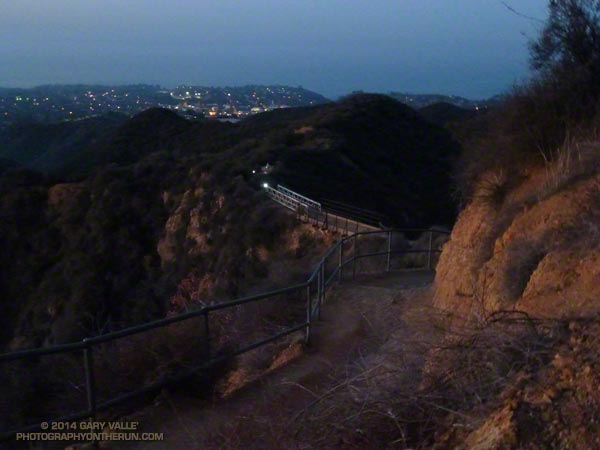 Last year I ran the Coyote Backbone Trail Ultra and enjoyed everything about it — the trails and scenery, the runners, the volunteers, the approach of the organizers, and just the general vibe of the event. The Backbone Ultra team did a superb job, and as far as I know there no major issues. Nobody got lost or seriously injured. The runners and volunteers were respectful to the environment and everyone I talked to had a great time participating in the event.

Still I wondered. Because of its complex logistics and administrative requirements would there be a 2nd annual Backbone Trail Ultra? Then on August 22, a little after lunchtime, the news was posted — there would be a “Game 2!” I needn’t have worried, RDs Howard Cohen and Mike Epler were on it! 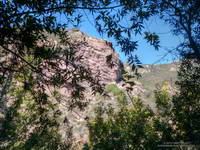 On March 15 at 6:07 a.m., at Will Rogers State Park, under the light of a 99% full moon, myself and 46 other runners in the first start group began our Backbone Trail adventure.

In the weeks leading up to the Backbone Ultra I’d been closely watching the weather. Two weeks prior to the run the area was inundated by the most rain in 48 hours since 2011. There had been some concern that heavy rainfall in the Springs Fire burn area in Pt. Mugu State Park would severely damage trails. That didn’t happen. 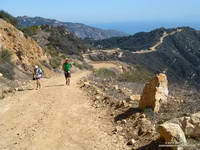 Ten days out it looked like an upper level low might affect the area. That didn’t happen. As the event neared, the forecast trended drier and warmer — much warmer. Friday as I was getting my drop bag ready, @NWSLosAngeles tweeted “Still expecting high temps to approach records at some locations this weekend” along with this graphic. That did happen!

On Saturday, the first day of the event, Santa Ana winds pushed the temperature at noon at Malibu & Piuma to 86 degrees — 16 degrees higher than during last year’s event! Note that this is the temperature in a ventilated, white-painted box several feet off the ground. The “in the sun” temperature, near the ground, on south-facing slopes was likely in the 90’s. Even more telling, the temperature at Circle X was in the 80’s from noon until 5:00 p.m. and at midnight was 74 degrees!

It must have been something to be on the Backbone Trail at its highpoint near Sandstone Peak in the middle of the night, with 100 mile visibility, a full moon and warm weather. I am really bummed to have missed that! I didn’t get to experience it because I had some kind of heat-related issue and dropped at the Encinal Aid Station at around mile 43.

This is the first time heat has kept me from completing a run or race. So what was the problem? Probably a combination of things. I don’t think I was under-trained or over-trained. I hadn’t just had the flu or a cold. My taper seemed OK. It wasn’t under-hydration, at least not in the first 30 miles. My best guess is that anticipating the heat, I drank too much early on. Not having trained much in the heat this year probably also contributed. It’s hard to know for sure. Sometimes it’s just not your day!

Although I didn’t get to the finish this year, I still very much enjoyed the miles I did run on the Backbone Trail. Here’s a slideshow of some images taken along the way.

It is a tribute to the many people that helped support the Backbone Trail Ultra that — by a substantial margin — there were more volunteers than runners! Many thanks to: