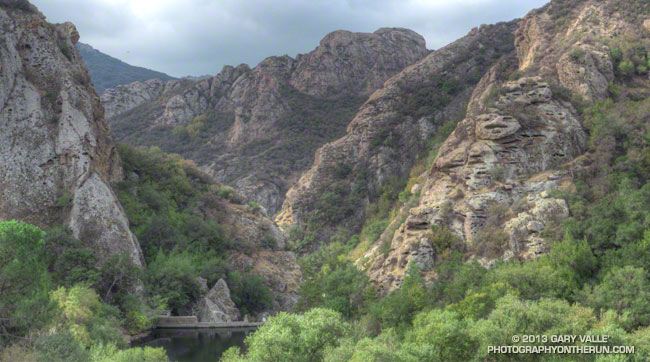 There are several places runners can start the Bulldog Loop: the main parking lot at MCSP, Piuma & Malibu Canyon, and Malibu Canyon & Mulholland are all popular starting points.

One of the best trailheads for starting this loop is often overlooked — the Cistern Trail and Phantom Trail trailhead on Mulholland Highway. Starting at this trailhead adds about 1.5 mile and 500′ gain/loss to the standard 14+ mile loop. Less than a quarter-mile into the run this variation passes one of the best viewpoints in Malibu Creek State Park.

The run can be easily extended by tacking on the Yearling and Deer Leg Trails in the Reagan Ranch area or by doing the Phantom Loop when the Grasslands Trail & Crags Road junction is reached after passing the MCSP parking lot.

The title photo is of Goat Buttes and Century Lake & Gorge from this morning’s run of the loop.