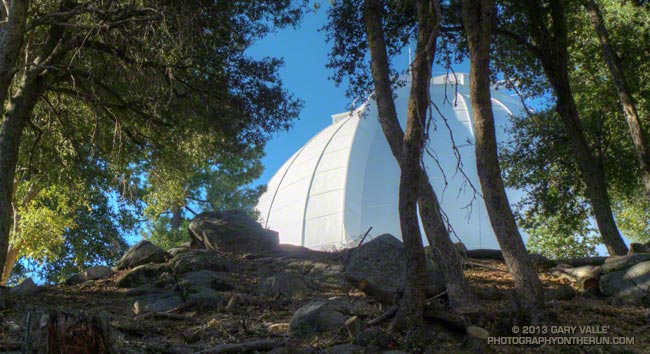 I’d paused to rinse my arms and legs, hoping to wash away at least a little of the poison oak and Poodle-dog bush I’d been unable to avoid. I was at a small spring part way up the Kenyon Devore Trail, doing a variation of a loop that my son and I had done a year before.

Driving up the Mt. Wilson Road I’d noticed that many of the bigcone Douglas-firs were heavily laden with cones. According to the Forest Service’s Silvics Manual bigcone Douglas-firs don’t often have bumper crops. Why now, following two subpar rain seasons, the most recent of which was unusually dry? Was the tree’s evolutionary knowledge playing the odds that a wet period of Southern California’s wet/dry ENSO cycle is a Winter or two away? At the moment La Nina or Neutral conditions look more likely this coming Winter, but the odds for El Nino could increase for the Winter of 2014-15.

Like last year there was plenty of poison oak and Poodle-dog bush along the Rim and Gabrielino Trails. The poison oak was about the same as last year — mostly but not entirely avoidable — but the Poodle-dog seemed worse. I’d hoped that this year’s much lower than average rainfall would suppress the growth of Poodle-dog bush, but if anything it seemed more robust. Poodle-dog had overgrown the trail in several spots, its long stalks and sticky leaves overlapping the trail like a gauntlet of pikes. Contact was unavoidable.

It had been interesting to visit Devore Camp. The last time I’d been there was in March 2003 when Gary Gunder and I paddled from the West Fork San Gabriel River from West Fork to Hwy 39. We had been fortunate to be able to paddle the reach with few portages. With all the downed trees from the Station Fire it may be many years before big storms flush the river channel to point it can be paddled without logs being a constant problem. 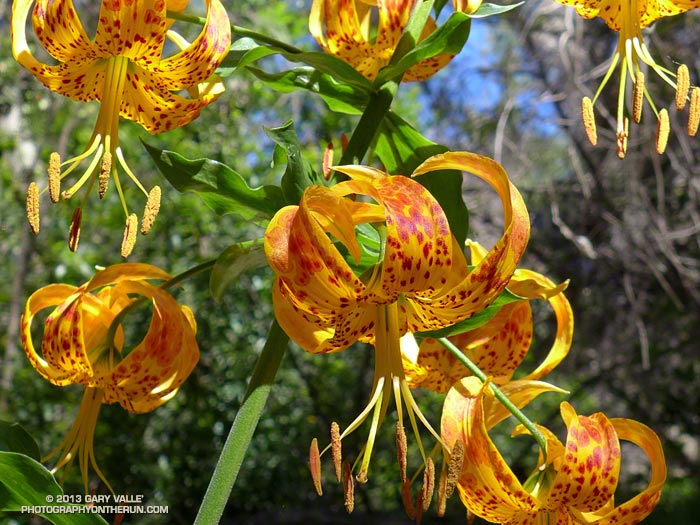 In addition to the expanses of Poodle-dog bush blossoms, a number of other wildflowers were in bloom, including Grinnell’s beardtongue, rose snapdragon, blackberry, pink, paintbrush, bush poppy, buckwheat, gilia, Keckiella and others. Along the West Fork the blossoms of spotted Humboldt’s lilies had beamed like yellow-orange paper lanterns scattered throughout an immense garden.

I cannot ascend the Kenyon Devore Trail without thinking about the Mt. Disappointment 50K/50M. During those races the little spring I was at now had always been a welcome source of “extra” water on the final climb to Mt. Wilson. The 2013 races have been cancelled, but are expected to return in 2014. We all know how tough R.D. Gary Hilliard is and look forward to next year’s race!

The voice seemed to come from nowhere. I looked to my left and right, but the trail was empty.

What the… I scanned the STEEP slopes above the creek, but still had a hard time locating the voice. After a moment of rustling, a helmeted figure emerged from the trees, carrying an orange mountain bike.

If you’ve done the Kenyon Devore Trail as part of the Mt. Disappointment races or at another time you probably recall the slippery stream crossing with the chain. The MTBer had apparently missed a switchback about a mile up the trail and descended directly down a ridge to the spring.

Update Friday, June 21, 2013. Lucked out with the Poodle-dog bush* and poison oak! Just one small spot of irritation on the top of an ankle, and it’s already almost gone.