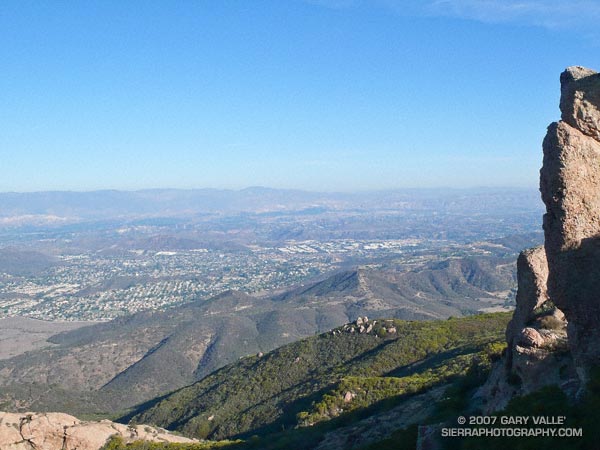 I liked last weekend’s run so much that this morning I returned to the Wendy Drive trailhead on Potrero Road and was now chugging up the Danielson-Old Boney trail, planning to do another circuit that would eventually take me back down into Big Sycamore Canyon.

Wearing short-sleeves, and without water bottles or packs, a group of three runners passed me as I plodded up the road. I guessed they were headed for the Danielson Monument. That’s where I was going — at least to start. The previous week I had noticed a use trail continuing east from the Danielson cabin site. It was well worn, and a little research confirmed that it was a route up the north flank of Boney Mountain.

My plan was to see where the trail led. That sounds like a given, but trails like this usually have a character of their own, and can lead to interesting areas and variations that demand exploration. Last week a hiker had asked me about this route, and commented that he hoped his group would make it up this time.

It didn’t take long to reach the spur trail to the cabin and monument. I turned left and followed the gently descending trail into the canyon. Where were the other runners? About the time I was beginning to wonder if they were doing an impressively fast and light circuit through Sycamore, I heard fleet-footed voices headed my way. We passed each other at the bottom of the canyon, and I continued the tenth of a mile up to the cabin site and the beginning of my adventure.

The route up the mountain was spectacular! This was not a trail engineered on a piece of paper, but a route that went where possible, following the vagaries and whims of the terrain. A long, sweeping traverse deep in the chaparral would seek a distant ridge and then dive back into the brush before suddenly turning directly and steeply uphill. Views of the valley grew more expansive with each step, and eventually I gained the first summit, marked 2701 ft. on the topo.

From here the trail followed a dramatic ridge, ascending a series of peaklets to a high point at about 2900′, across a canyon and to the north of Tri-Peaks (3010′). My immediate goal was to cross over to Tri-Peaks. From there I would find my way to the Backbone Trail.

What had been a well trodden path, now became less distinct. From my viewpoint, a route up the north side of Tri-Peaks looked improbable. Choked with brush and trees, the peak was an amalgam of massive volcanic blocks and boulders, fused with chaparral.

Following the crest of the Boney Mountain escarpment, I dropped down to a saddle. To my right, the terrain plunged between steep cliffs to Big Sycamore Canyon, more than 2500′ below.

Unsure of the route, but endorphin energized, I followed a path up and into a maze of corridors and rooms among the towering rock formations, eventually emerging at the summit block. Working my way out of the shadows, I traversed around to the south side of the peak. From here the Tri-Peaks trail was an obvious slash in the brush and in a few minutes I was on the Backbone Trail, headed west.

The downhill running on this section of trail is among the best in the Santa Monica Mountains, with memorable views of Boney Mountain’s massive western flank. In five miles and a nearly effortless hour I was down to the Danielson multi-use area.

I stopped for water and briefly debated how far to run down Big Sycamore. Not far — I picked up the Ranch Center fireroad (unpaved) and followed it up to the Hidden Pond trail, finishing the run like last week, on the Upper Sycamore and Danielson/Old Boney trails.

Here’s a Google Earth image and KMZ file of a GPS trace of the approximately 18.5 mile route.