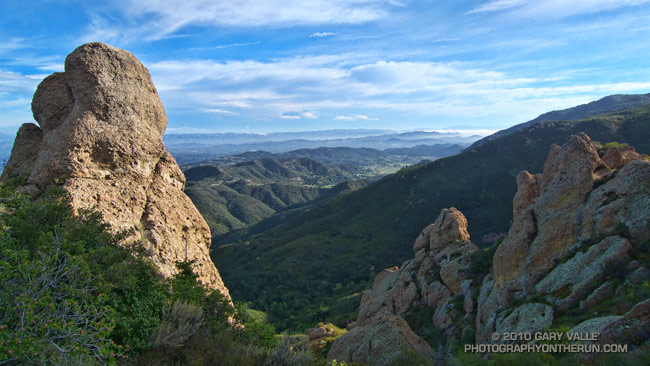 The face was not steep, but I was glad the pockmarked volcanic rock had big holds. Rainwater filled some of the pockets, and patches of lichen and moss on the face were saturated and slippery. It wasn’t a runout climb at the Needles or Tuolumne Meadows, but gravity still worked the same way. I reminded myself not to do something “stoopid.”

At the top of the face I looked around and sighed, and then looked around and sighed again. It was another stunning morning on the western ridge of Boney Mountain. To the west a nearly full moon struggled to remain above the hills, its brightness veiled in a mix of clouds. Another storm was expected in the evening, and the sky told of its approach. Broad strokes of cirrus brushed the blue above, and here and there fingers of tattered stratus reached into the coastal canyons and clung to the wet hillsides.

Today’s forecast for the Santa Monica National Recreation Area had called for mostly cloudy skies, and a high in the 60s. At the moment it was mostly sunny, but already there were hints of clouds developing on the ridges and mountaintops. At some point in the day the clouds would envelop the mountains, and transform the morning’s expansive vistas into a dimensionless gray. I hoped to get up the ridge, over Tri-Peaks, and to Sandstone Peak before that happened.

By chance the clouds behaved, and the splendid views and weather continued all the way to Sandstone Peak, and beyond. The run back to the Wendy Drive trailhead on the Backbone, Sycamore Canyon, and Upper Sycamore trails could not have been better.

As I climbed the final little hill to the parking area I noticed I had no shadow. Over the course of the afternoon the cloud deck would continue to lower and thicken, and by evening light rain would begin across the area.