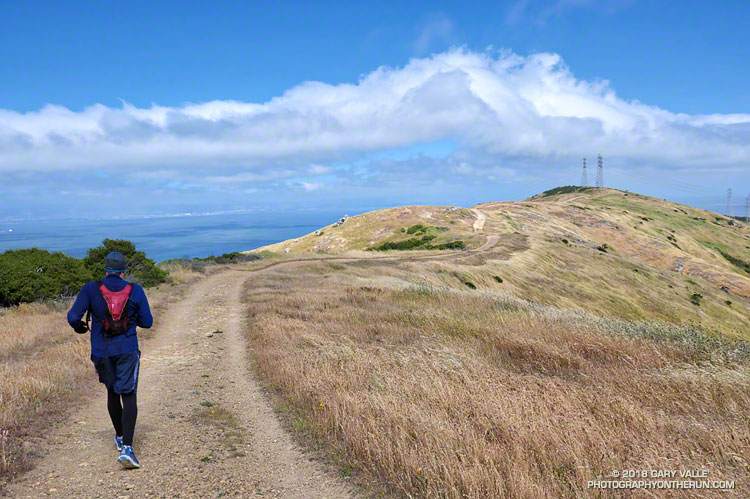 I staggered in the wind gust. It had to have been at least 45 mph. The views along the undulating ridge to the Bay were spectacular, but the wind was ferocious.

Brett and I were running on the San Bruno Mountain Ridge Trail. We’d started at the summit parking lot and weren’t exactly sure where we were going to turn around. We’d know when we got to it.

The NWS forecast for San Francisco had called for “breezy” conditions:

.TODAY…Mostly cloudy in the morning then becoming partly
cloudy. Breezy. Patchy drizzle in the morning. Highs in the mid
50s to lower 60s. West winds 20 to 30 mph.

That forecast was for the city — and of course up on the peak the wind was even “breezier.” The SF Giants beanie I borrowed was the right call. So were the gloves, extra shirt and wind shell.

We continued along the ridge past the second set of loudly singing power lines and continued downhill. It became one of those, “let’s just go down to that next overlook,” and then the next one, and the next one. Not only were we losing a lot of elevation, but we’d be running into the wind on the way back.

We eventually turned around a little above Bayshore Blvd., at the “Sierra Point Reset” benchmark marked “487” on the topo map. As is often the case, the return wasn’t nearly as torturous as envisioned, but I was glad to get back to the car!