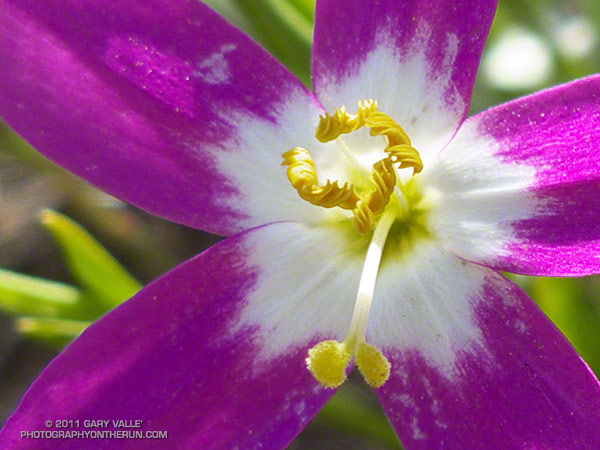 Relatively uncommon in the areas in which I run, the vivid rose-purple of Canchalagua (Centaurium venustum) is always a treat to see. Not only are its colors eye-catching, it’s petals are unusually uniform and precisely formed, which makes the flowers stand out even more.  A closer look reveals bizarrely shaped anthers, which are fluted and spiraled.

The plant is reported to have been used medicinally, but according to Chumash Ethnobotany by Jan Timbrook & Chris Chapman, based on the field notes of John P. Harrington, it wasn’t clear whether it was “a remedy of the old-time Indians, or of the whites.”

Here’s an advertisement from an 1852 volume of the American Whig Review, in which Canchalagua was specified as an ingredient of the patent medicine “Dr Rogers’ Compound Syrup of Liverwort, Tar and Canchalagua.” (The document was digitized by Google as part of the Making of America Project.)