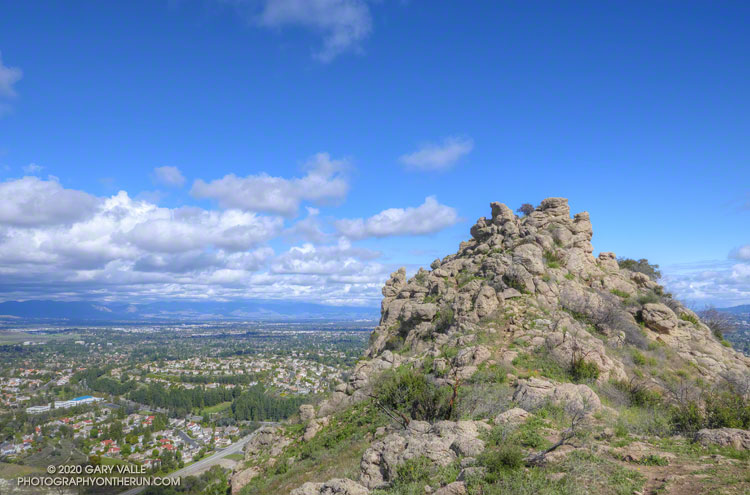 From the rocky summit of Castle Peak I traced the course of Bell Creek into the San Fernando Valley, imagining the broad valley as it might have been a few hundred years before. Bell Creek would have joined Chatsworth and El Scorpion Creeks to form the Los Angeles River. Unconfined, the river would have been a riparian ribbon of willow green, winding its way across the valley and through a patchwork of grassland and sage scrub. Areas of the valley would have been punctuated with oaks, wetlands, and scattered chaparral.

A wall of marine haze would likely be seen near Kaweenga, and threads of smoke might mark the location of other communities. Later in the year, the grasslands would be set afire, promoting next year’s growth, and protecting and enhancing the health of the oaks. As they do today, the San Gabriel Mountains would beckon in the east — but would be antenna free.

There would have been little noise… No distant horns, freeway drone, or roar of airplanes. Occasionally, a broken voice might have wafted up from the community below. The wind would rustle between the summit rocks, and the loudest noise might be the song of the canyon wren, or screech of the scrub jay.

Known by the Ventureño name Kas’élewun, Castle Peak is a landmark of spiritual significance to the Chumash and Gabrielino. Perched at the end of a tongue-like ridge, the peak stood over the multi-cultural community of Huwam, where Chumash, Tongva and Tataviam people lived.

Kas’élewun and the nearby Cave of Munits were places of power and ceremony. Stories would be told of the sorcerer Munits and his death upon the mountain, and of a gruesome creature inhabiting its caves. Some would tremble at the thought, and an angry parent might caution a child to behave, or risk angering the beast on the mountain.

It is a haunting night, and torn clouds race past a silvery moon. From the margin of the village I glance up to Kas’élewun to see a solitary figure briefly silhouetted on its summit. I rub my eyes and only the clouds remain…

Note: Like so many placenames in the Valley,  “Castle” appears to be a corruption of the Chumash name for the peak, Kas’élewun. Rather than alluding to a castle, it can be translated as “tongue,” perhaps because the formation sits at the end of a long ridge that extends out into the valley . The title photograph of Castle Peak is from a run on March 19, 2020.