Update January 4, 2022. Did the Garapito Trail again this weekend as part of a longer run through Santa Ynez Canyon. The debris from the fallen oak tree was much easier to get through this time. Some people coming down the trail after me had a small saw, and said they were planning to work on it.

Update December 31, 2021. It turns out that a lot more rain was on the way! Los Angeles recorded 9.46 inches of rain this month, making it the third wettest December on record, going back to 1877. This puts Los Angeles at 10.40 inches for the Rain Year to date, which is about 237% of the normal.

It had rained the past three days, including Christmas. Today was the 26th, and Downtown Los Angeles (USC) had recorded nearly 150% of the rainfall normally recorded in December. And more was on the way.

I clicked START on my Garmin as I passed the gate at the Top of Reseda. It was about twenty minutes before sunrise. The temperature was around 40 and the eastern sky was brightening with the advancing sun. As I worked up the initial trail to dirt Mulholland, thousands of lights twinkled across the San Fernando Valley.

The chaparral was soaked with overnight rain; and befitting the Holiday season, was ornamented with thousands of silvery water drops.

I took my usual route, turning off Mulholland onto Fire Road #30, and then following it to the Hub. From the Hub, Eagle Springs Fire Road led down to Eagle Springs, then beneath the sunlit face of Eagle Rock to Eagle Rock Fire Road and the top of the Musch Trail. In the Palisades Fire burn area there was some significant erosion along the fire road where the runoff wasn’t controlled.

I’d be doing the Musch Trail later in the run, but for now continued down Eagle Springs Fire Road toward Trippet Ranch.

Mud — slippery, cake-on-your-shoes mud — isn’t normally much of an issue until past the Musch Trail and on the steeper downhill that leads to the top of the Santa Ynez Trail and Trippet Ranch. Today there were some slippery spots, but it wasn’t too bad. Remarkably, I didn’t see anyone until I reached the Trippet Ranch parking lot.

My return route from Trippet Ranch was mostly on trails, beginning with the Musch Trail. There are usually a few muddy sections on the Musch Trail after a good rainstorm. Today, one wet, muddy section of trail was steaming in the morning sun. Once I was on the steep climb up to Eagle Rock Fire Road, most of the significant mud was left behind.

At the top of the Musch Trail, I turned left on Eagle Rock Fire Road and worked up past Eagle Rock and over to the top of the Garapito Trail. I run this trail often, and know it well. Winding down through decades-old chaparral, I became lost in thought, immersed in the outdoor experience, and enjoying every aspect of the trail.

That was why it was such a shock when, at the bottom of the mile and a half descent, the trail suddenly ended in a wall of brush.

That couldn’t be. Had I somehow turned onto a use trail? Nope, I was on the right trail.

That’s when I noticed the “brush” was the top branches of a large oak. The fallen tree had COMPLETELY blocked the trail. I took a quick look around for an alternate route and didn’t see anything obvious. Working through the mishmash of foliage and branches was a bit like bushwhacking through dense manzanita. With some effort, and some rock climbing moves, I eventually emerged on the other side of the mass. The fallen tree was part of an old, multi-trunked oak that has been collapsing over a period of weeks.

The remainder of the run was uneventful, but enjoyable. Continuing up the Garapito trail to Fire road #30, I crossed the fire road and picked up the Bent Arrow Trail. This connects to dirt Mulholland, which leads west to the Top of Reseda. 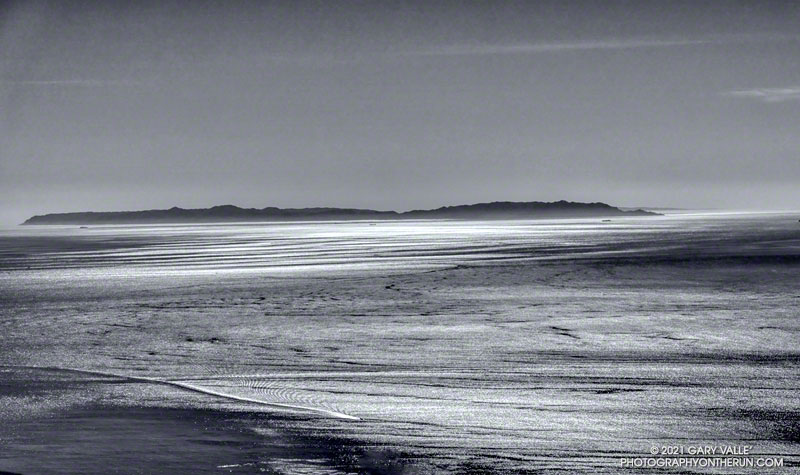 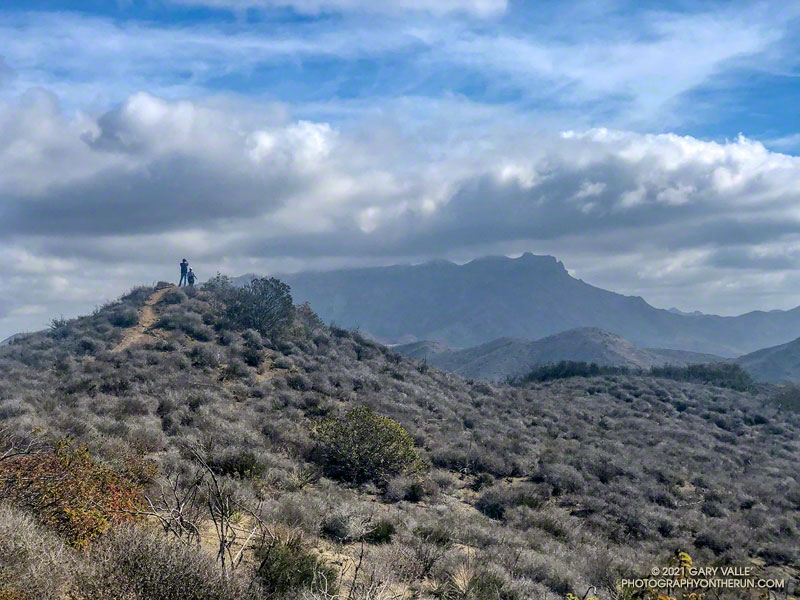 When I parked at the Wendy Drive trailhead, there was just enough light to see a wide band of high clouds overhead. That was good news. With a well-advertised storm expected to move through the area the next day, I hadn’t been sure what weather to expect for today’s run.

The general forecast was for low clouds and fog in the morning, giving way to partly cloudy skies in the afternoon. I was going to be running one of the more scenic trails in the Santa Monica Mountains — the Ray Miller Trail. High clouds and sunshine were a much better option than running in the fog or with gloomy, overcast skies.

Shortly after leaving the trailhead, the band of high clouds became underlit by the reds, oranges and yellows of the rising sun. It was going to be a good run.

The route-finding on this run is relatively straightforward. From the Wendy Drive trailhead on Potrero Road, run over to the Satwiwa Native American Indian Culture Center (see Satwiwa map). From the Culture Center run 4+ miles on Big Sycamore Canyon Road/Trail toward the beach. Some of this is paved.

The Ray Miller Trail drops about 1000′ over 2.6 scenic miles. There is usually water available at the parking lot at the trailhead. Today the conditions were about as good as they get. The trail was in excellent condition. The temperature was in the mid-70s. The marine layer was holding offshore and a few puffy clouds had formed over the higher peaks.

One of the things about the Ray Miller Trail is that run/hike up it is almost as enjoyable as the run down. It is a very popular, and there are almost always runners and hikers on the trail. Running up a section of trail, I thought I recognized someone going down. It was nine-time Badwater finisher Chris Frost. We talked for a while about trails, running and races.

From Overlook Fire road the route back to Wendy was a familiar one — Hell Hill, Wood Canyon Fire Road, Two Foxes Trail, Big Sycamore Canyon Road, Upper Sycamore Canyon Trail, Danielson Road, and the Satwiwa Loop Trail. Including a short jog over to PCH the run was a little over 24 miles with about 3100′ of elevation gain.

Here’s an interactive, 3D terrain view of the Wendy Drive – Ray Miller Out & Back trail run. The map can be zoomed, tilted, rotated, and panned. For help controlling the view, click/tap the “?” icon in the upper right corner of the screen. Track and placename locations are approximate and subject to errors. Poor weather, and other conditions may make this route unsuitable for this activity. 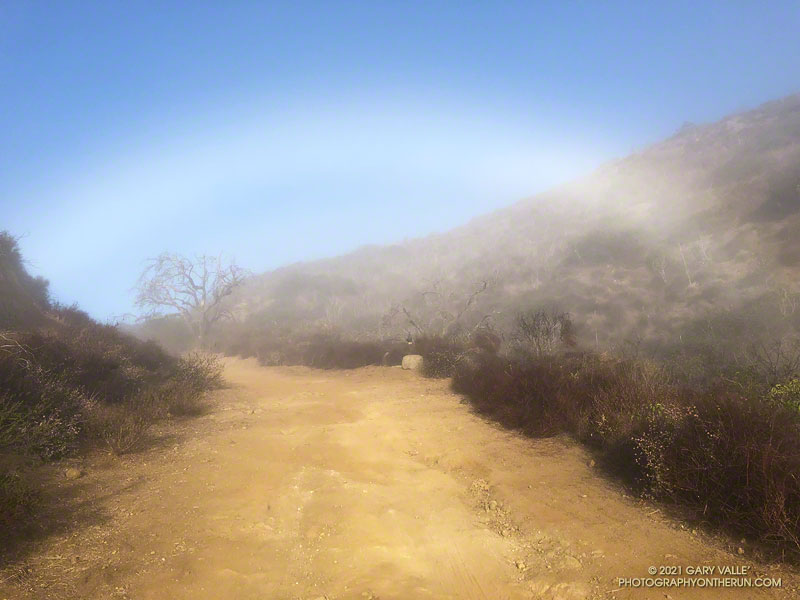 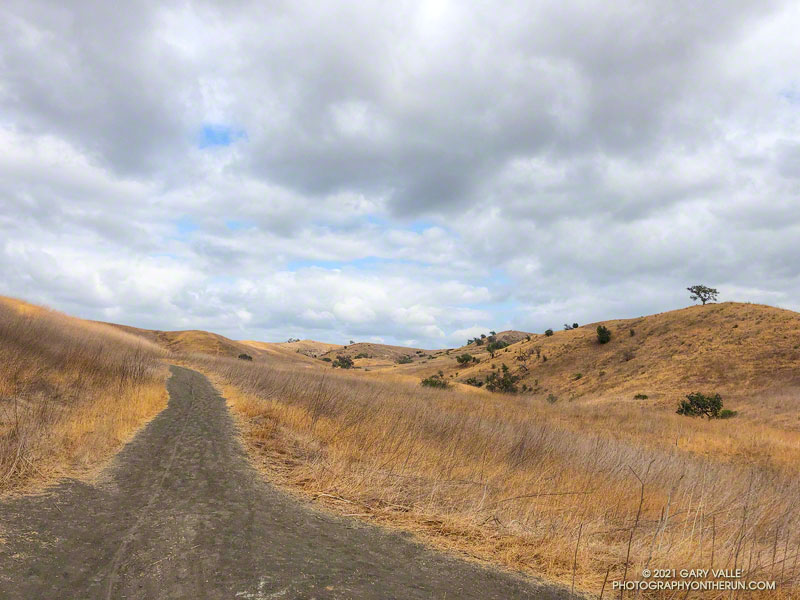 According to the NWS, the high temperature of 75 degrees at Woodland Hills (Pierce College) was the lowest for the date on record. The temperature at the Cheeseboro RAWS didn’t reach the 70s until around 1:30 p.m., and finally hit 75 around 4:30 p.m. Earlier in the day, the station recorded 0.03 inch of light rain.

I took advantage of the cooler weather to do an out and back trail run from the Victory Trailhead to Cheeseboro Canyon. The nine mile run has an elevation gain/loss of around 1000′. Except for a couple of hills, it’s a relatively fast-paced route, particularly on the way out to Las Virgenes Canyon. There are two creek crossings in Las Virgenes Canyon. These dried up earlier this year, but in some years the crossings have enough water to get your shoes wet.

It’s not a good run to do when it’s hot, and in the Summer Ahmanson is almost always hot. In-the-sun temperatures are typically above 100 degrees, and sometimes reach 110 degrees or more. More than once I’ve encountered people on Ahmanson area trails that misjudged the conditions and were out of water. And sadly, dogs are especially susceptible to heat.

Here’s an interactive, 3D terrain view of the run. The map can be zoomed, tilted, rotated, and panned. For help controlling the view, click/tap the “?” icon in the upper right corner of the screen. Track and placename locations are approximate and subject to errors. Poor weather, and other conditions may make this route unsuitable for this activity.

Those that recreate at Ahmanson will recognize the title photo as East Las Virgenes Canyon, about 1.1 mile from the Victory Trailhead. This is where a trail/road to Lasky Mesa forks off the main road.