While doing the Bulldog Loop earlier this year, I encountered an enthusiastic hiker who commented, “Aren’t the wildflowers amazing?”

He added, “There are so many, uh… What’s it called? You know, the one that smells like maple syrup.”

“Do you mean Everlasting?” I asked.

That’s what people remember about California Everlasting — the leaves smell like maple syrup.

The somewhat nondescript plant is especially abundant this year.

As suggested by its name, California Everlasting (Pseudognaphalium californicum) can be found along trails in Southern California chaparral and coastal sage-scrub just about any month of the year.

The plant looks like it is blooming in the title photo, but each “petal” is a botanical structure called a phyllary. The phyllaries form a protective covering around a disc of tiny flowers as they develop. Here is a closer view.

The plant dries out in the Summer, but the flower-like structures often remain – an everlasting dried flower arrangement.

The photos are from this morning’s run to Calabasas Peak on the Secret Trail.

With the reopening of trails in the Santa Monica Mountains, my list of “must do” trails is impossibly long. Today, I headed over to Malibu Creek State Park to do a variation of the popular Bulldog Loop, and catch-up on what was happening in the Park as it recovers from the Woolsey Fire.

The route I was running starts at the Cistern Trail trailhead on Mulholland and descends to Crags Road using the Lookout and Cage Creek Trails. After a side trip on the Forest Trail to see the coast redwoods, it continues counterclockwise around the regular Bulldog Loop. Here’s an interactive, 3D view of the approximately 17-mile variation of the Bulldog Loop.

As I ran along Crags Road toward the M*A*S*H site, I wondered how much water would be in Malibu Creek, and if the fallen tree used to cross the creek would still be there.

Since February 2019, hikers, runners, and riders doing the Bulldog Loop or headed to the M*A*S*H site have had to either get their feet wet or use a fallen tree to cross Malibu Creek. The concrete slab bridge is still there, but the stream now flows around the bridge, rendering it useless.

The bridge survived a canyon-wide flood in mid-February 2017. But two years later, and just 11 weeks after the Woolsey Fire, sediment-laden runoff from burned hillsides clogged the drainage pipes embedded in the bridge’s concrete slab. With nowhere to go, the stream simply circumvented the structure.

Nearly to the bridge, I turned right off of Crags Road and followed the well-trodden path along the creek for about 70 yards. The downed tree had not washed away. Not wanting to take an early morning bath, I carefully worked across the logs and limbs and then rejoined the Crags Road Trail, near a coast redwood.

Whenever I do the Bulldog Loop, I usually stop by the Forest Trail and see how the 100+ year-old coast redwoods are doing. Several of the 16 or so redwoods were killed by the 2011-2015 drought, and virtually all the trees were scorched in the Woolsey fire.

I’d last checked on the redwoods at Christmas and had been encouraged by the condition of the remaining trees. In Los Angeles, three of the past four rain years have recorded average or above-average rainfall. This seems to have really helped the surviving redwoods.

There are five or six trees that are doing well. They’ve added a lot of new foliage and look healthy. I was excited to see that a young, naturally-germinated redwood was thriving. It was burned in the Woolsey Fire and lost most of its foliage.

Leaving the redwoods behind, I continued toward the M*A*S*H site and then up the Bulldog climb.

Live oaks are amazingly resilient. Oaks, more or less as we know them, have been around for millions of years. According to Cal Poly’s PolyLand web site, 25 myr-old fossils of coast live oak have been found in the Pacific Northwest. This suggests an exceptionally adaptable species.

As I worked up the Bulldog fire road, I marveled at the number of live oaks sprouting new foliage on their burned trunks and limbs. On Mesa Peak Mtwy fire road, there is a grove of live oaks that used to provide welcome relief from the blazing-hot summer sun. On the crest of a ridge, the trees must have been fully-engulfed in fire when burned during Woolsey Fire. None the less, the trees are recovering. Compare this December 2018 photo of one of the larger live oaks, to what it looks like today. Incredible!

Cruising along Mesa Peak Mtwy fire road, I took an auditory double-take. What the heck was all the buzzing around me? That’s when I realized the loud, resonate buzz was from thousands and thousands of bees. I’d just run into a huge aggregation of digger bees.

I’ve encountered them before. Even though the males (reportedly) don’t have a stinger and the females (reportedly) aren’t usually aggressive, it was a little unnerving walking through so many active bees. Here’s a video snapshot of the bees.

Digger bees are not social in the same way as honeybees. Female digger bees build their individual brood cells in a communal area to efficiently reproduce. According to behavioral ecologist John Alcock, the males emerge slightly before the females and then fly low over the area, searching for females that are about to emerge. Using their antennae, the males can find the females in a burrow, before they emerge, gaining a competitive edge. For more info, see the article Desert Diggers, in Arizona State University School of Life Sciences’ Ask A Biologist web site.

Splendid Mariposa and Other Wildflowers

At first I ran past it. I was descending the Tapia Spur Trail and nearly to the gravel parking lot in Malibu Creek State Park when a flash of purple caught my eye. My thought was that it was a solitary farewell-to-spring (Clarkia). But something didn’t seem right, and it would be unusual to see just one farewell-to-spring. So I went back to take a look, and it turned out to be a splendid mariposa lily (Calochortus splendens). Although it is common in areas south of Los Angeles, it is the first I have photographed in the Santa Monica Mountains. This one was not quite so splendid as it might have been since a beetle had been feasting on its petals.

Here are a few other flowers seen along the way: 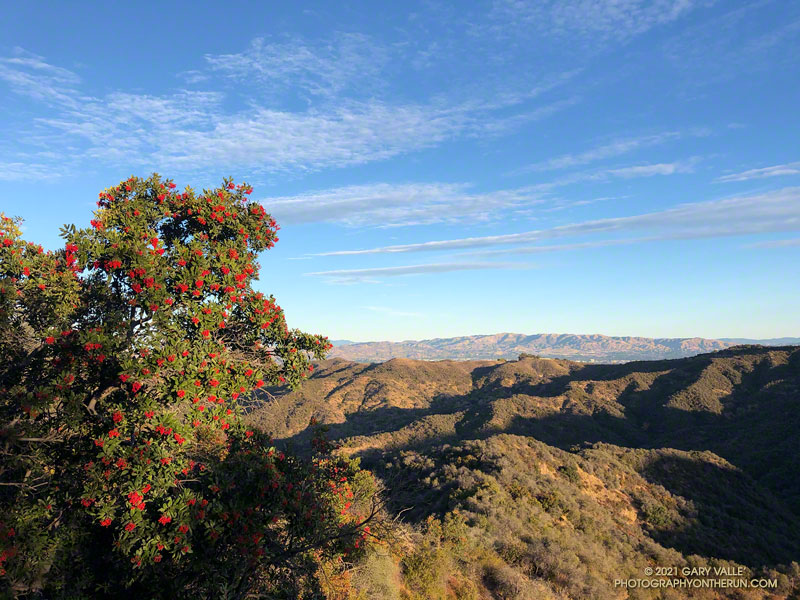 The numerous interconnecting roads and trails of the eastern Santa Monica Mountains can be combined to create trail runs ranging from a few miles to marathon length or more.

One of my favorite trails in this area is the Garapito Trail — a winding, up and down trail through dense, old growth chaparral. The trail connects Fire Road #30, near dirt Mulholland, to the Eagle Rock Fire road segment of the Backbone Trail, near Eagle Rock. Because it’s such a enjoyable trail, I include it in most of the runs I do from Marvin Braude Mulholland Gateway Park (Top of Reseda). The trailhead is at the southern end of Reseda Blvd., on the San Fernando Valley side of the Santa Monica Mountains.

Each run in the series starts the same way, going up to Mulholland using the single track trail that forks right off the fire road near the Reseda trailhead, and then heading southwest a short distance on Mulholland to Fire Road 30, which works south, up to the Hub.

The shortest run in the Garapito series is the 7.5 mile Garapito Loop. Somewhat longer and more strenuous is the 12+ mile Trippet Ranch Loop. A very demanding run in the series is an approximately 26 mile route out to Saddle Peak and back. The popular run out to Parker Mesa Overlook and back tacks on about 6 miles to any of these routes.

Below are links to 3D, interactive views of GPS tracks of some of the Garapito Series trail runs from the Top of Reseda. The scene can be zoomed, tilted, rotated and panned. Placemark and track locations are approximate and subject to errors.

These are just a few of the many variations that are possible.