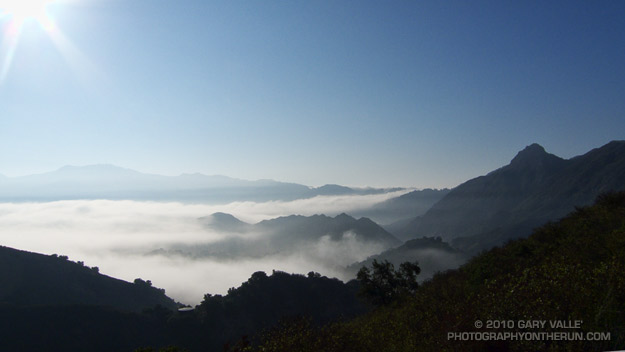 Did a variation of the “Phantom” loop in Malibu Creek State Park this morning. The basic loop links together the Grassland, Liberty Canyon, Phantom, Cistern, Lookout, Yearling, Deer Leg, and Cage Creek Trails, as well as Crags Rd.

The peak in the haze on the left of the photograph in the distance is Saddle Peak. The peak on the right is Brent’s Mountain. 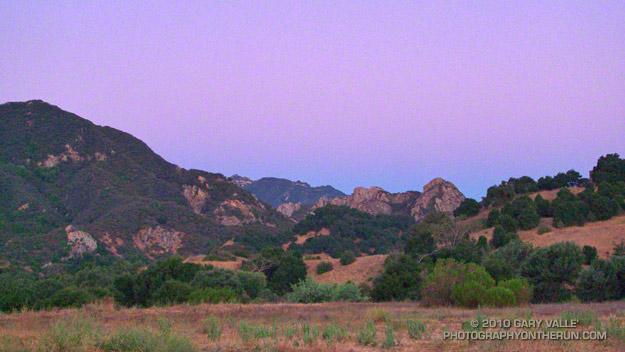 Goat Buttes and the Bulldog Climb from Near the Start

The week following the Mt. Disappointment 50K, with the Edison and Kenyon Devore climbs still etched in my mind, I noticed that the Bulldog 50K hadn’t filled yet. Hmmm… Could I do it? The little hill on my Wednesday afternoon run hadn’t felt bad. Thursday I had done a little longer run, with a little longer hill. It was no Bulldog climb, but it felt OK. I decided that if the 50K didn’t fill by Friday, and the weather forecast for the race wasn’t crazy hot, I’d give the Bulldog 50K a go.

Malibu Creek State Park is only about 20 minutes from my home, and I run the Bulldog loop frequently, but because of scheduling conflicts I’m usually unable to run the Bulldog 50K. It often falls on the same weekend as the Miracle Hot Springs Whitewater Slalom race, and just two weeks after the Mt. Disappointment 50K. This year, because of a good “El Nino” snowpack, the paddling season on the Lower Kern was going to be longer than usual, and the Miracle Race was moved to late September. But had my legs recovered enough from Mt. Dis?

As the week before the race progressed it became evident a) my legs were not as recovered as I had hoped, and b) race day temps were going to be a little warmer than originally forecast. The RD’s day-before-the-race email confirmed the warmer weather:

“IT WAS 82 DEGREES AND NO CLOUD COVER AT 8:30AM THIS MORNING AT THE PARK. BE PREPARED FOR HIGH TEMPERATURES AND FULL SUN ON RACE DAY TOMORROW… NSD”

Whatever the thermometer said, the temperature on the first loop wasn’t an issue. There were a couple of warm spots on the Bulldog climb, but there was also a lot of shade. Bulldog was actually pretty painless, and I commented to another runner that I wished it would be like that the second time around!

The last time I’d done the Bulldog 50K was in 2003. Back then the course wasn’t a double loop. There are pros and cons to the double loop format. Sometimes it helps to know what’s coming, and sometimes it doesn’t. It depends on what kind of day you’re having. This morning the first 25K had gone well, and as I jogged under the oaks along Malibu Creek at the beginning of the second loop, I thought maybe, just maybe, my legs would last.

It was about half-way up the Bulldog climb the second time that reality set in. The sun was 3 hours warmer, the climb longer, and gravity (for sure) stronger. I overheard another runner remark, “from here there’s no more shade.” And there wasn’t.

From the top of Bulldog it’s less than a mile of downhill to the Corral aid station. My mind liked the idea of running downhill, but after all the miles of uphill my legs were having trouble with the transition, and were getting a little crampy. It probably wasn’t a coincidence that this was also the point where I started to run out of gas. Not a full-on bonk, but there wasn’t much left in the tank.

The parts of the course I enjoy the most — running through the rock formations east of the Corral aid station, and the panoramic views of the ocean and mountains from Mesa Peak fire road — were a bit of a struggle. It helped to talk with some of the runners along the way. There were new runners, old runners, fast runners, and slow. Every runner has a different story, perspective and challenge.

Eventually I reached the start of the long, sometimes steep, downhill to Tapia Park. On the way down, one runner that passed me commented, “I was looking forward to this section, I didn’t expect it to be so hard!” No argument there. After cooling off at the Tapia aid station, it was on to another tough part of the course. I was prepared for the Tapia Spur Trail to be an oven, but a nice breeze kept the temperature reasonable. 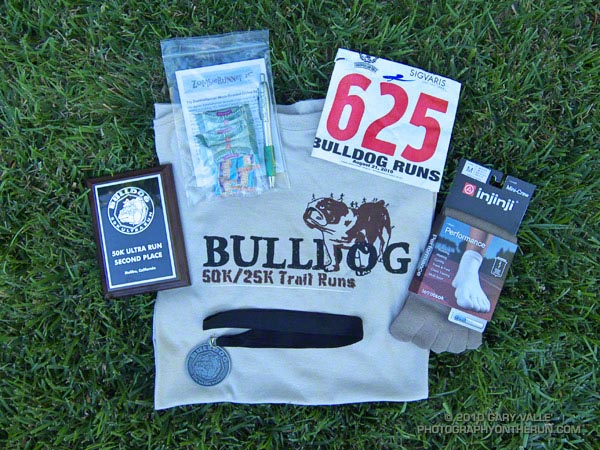 I had been warned that the final little climb up the paved road and around to the finish would be a killer. It was a long, long half mile, and at one point I wondered if the course might continue past the entrance station and out of the park! A couple minutes later I was across the finish line. And about a minute after that I was eating a big chunk of ice cold watermelon!

Many thanks to R.D. Nancy Shura-Dervin and Larry Dervin, all the volunteers, sponsors, support personnel, and runners for a great race. The aid station volunteers were fantastic. All I had to do was soak my head in ice water while my bottles were being filled!  For Nancy’s race report, all the results, and 2000+ photos, see the Trail Run Events web site. 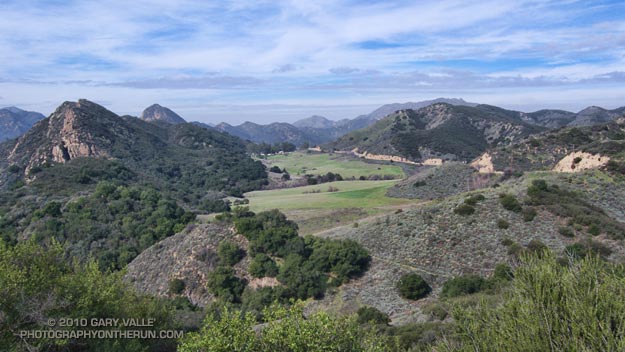 While running the Phantom Trail a couple weeks ago, it occurred to me that the Grassland, Talepop, Liberty Canyon and Phantom Trails could be combined with the Bulldog Loop to create a challenging — and very scenic — twenty-something mile trail run.

Just how much longer than twenty depends on which trails you use to connect the Phantom Trail to Crags Rd. I opted to use the Cistern, Lookout, Yearling, and Deer Leg Trails. This variation works out to a little more than 24 miles. Tack on an out and back to the Mesa Peak overlook and you have a marathon length scenic tour of Malibu Creek State Park!

Here’s a Cesium browser View of a GPS trace of my route.

The title photo is a view west from the Cistern Trail to the former site of the Reagan Ranch.

Note: Check for ticks when running here — particularly in the Winter & Spring!