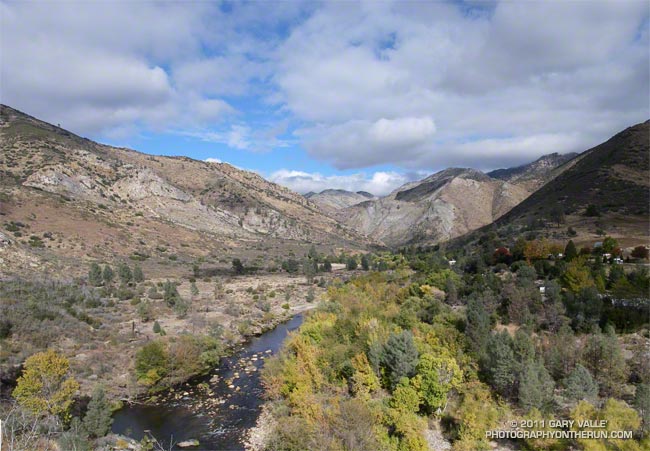 The Burger Run is one of those runs that is much more difficult than its 14.5 miles and 2000′ of elevation gain would suggest. For one thing the Whiskey Flat Trail ain’t no namby-pamby city trail. It’s a rustic single track trail in the Southern Sierra that runs along the Kern River from the outskirts of Kernville up to Johnny McNally’s Fairview Lodge and Restaurant — and burger stand.

The trail is single track all of the way, with so many ups and downs you’ll think you’re riding a Magic Mountain roller coaster. It seems around every corner there is another creek or a ravine. The running is varied and technical, ranging from sweet pine-needle-lined stretches of trail to gnarly, V-rutted, overgrown, rocky, sandy, steep sections that test your trail running skill.

For a time it looked like a big low moving down the coast might cause some weather problems, but overnight rain turned to partly cloudy skies race day morning, with near perfect weather for the runners and walkers.

Many thanks to race director Mike Lane, all the volunteers, McNally’s, Indian Wells Brewing Company, and all of the friendly hikers and runners. Proceeds from the race benefit Run 4 A Way, a local non-profit group dedicated to enhancing the fitness and well being of the local youth. Results and finish line photos are posted on Run 4 A Way’s Facebook page.

Here’s an interactive Cesium browser View of the Burger Run course and an elevation profile generated in SportTracks. Following are a few additional photos. Click for a larger image: 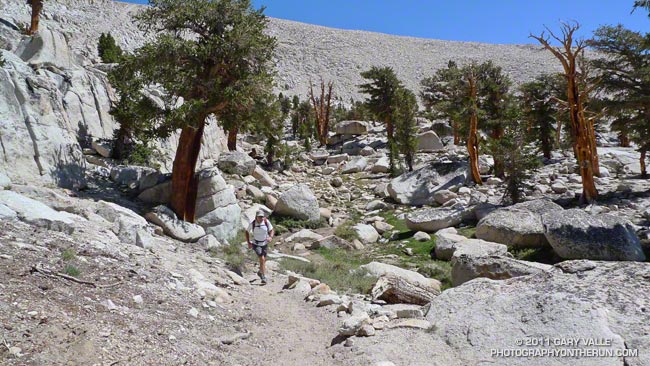 The Cottonwood Pass – New Army Pass loop is a longtime favorite that I try to do at least once a year. There’s nothing quite like running at 11,000′ through a forest of gnarled foxtail pines — some perhaps a thousand years old — then working up a glacier sculpted basin to one of the higher passes on the Sierra crest.

The trail run is the closest high altitude loop to Los Angeles that is almost entirely over 10,000′. Although its 21 mile length and 3400 ‘elevation gain/loss appear relatively moderate from an ultrarunning perspective, keep in mind it is a high mountain run that reaches an elevation of 12,300′, and includes 12 miles that are over 11,000’. Nearly three miles are above tree line. It’s kind of like driving to the top of Mt. Baldy and then starting your run from there.

This year a record-setting snowpack pushed back the date the loop could be done (as a trail run) to late July. I’d hoped to do it two weeks before the Mt. Disappointment 50K, but thunderstorms and flash floods quashed that plan. The next opportunity to do the loop was on Saturday, but once again thunderstorms were in the forecast.

A look at the SWFRS Bald Mountain #5 web cam midday Saturday confirmed the sketchy weather. The camera showed developing clouds from Olancha Peak on the south to New Army Pass, Mt. Langley and Mt. Whitney on the north. We wanted to enjoy the run in short-sleeves and shorts, so postponed the run to today.

And today the weather was perfect! A plus was that Saturday’s rain had dampened the sometimes sandy and dusty trails, improving their condition and refreshing the landscape.

One of the interesting aspects of the run was that patches of snow remained from last Winter’s heavy snowpack. Not only were there patches of snow on New Army Pass, and elsewhere above 12,000′, but there was snow in lower, more exposed locations such as on the southeast-facing slopes above Chicken Spring Lake. Much of this high altitude snow will carryover into this Winter.

Here’s a Cesium browser View and elevation profile of a GPS trace of the loop. The view can be zoomed, tilted, panned, etc. Additional info, a slide show, and more photos are available in previous posts about this loop. 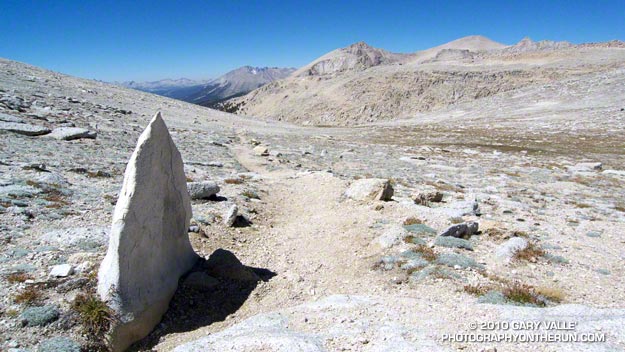 The run loops through glacier-sculpted Eastern Sierra terrain, crosses the crest twice, and along the way passes some spectacular high mountain meadows, lakes, and stands of weather-hardened foxtail pines.

Because of the altitude and the technical nature of some sections of trail, this run feels longer than the 21.25 miles indicated by my GPS. Another reason it seems longer is that I usually do the run as a day trip, driving from a few hundred feet above sea level in the San Fernando Valley, up to the Horseshoe Meadow trailhead at 10,000′. Depending on the number of photo stops, and if I have to stop for water, the loop can take 30% to 40% longer than a loop of the same length and elevation gain near sea level.

Today’s run of the loop was outstanding. Short-sleeve and running shorts weather, and people on the trail as happy to be there as I was. 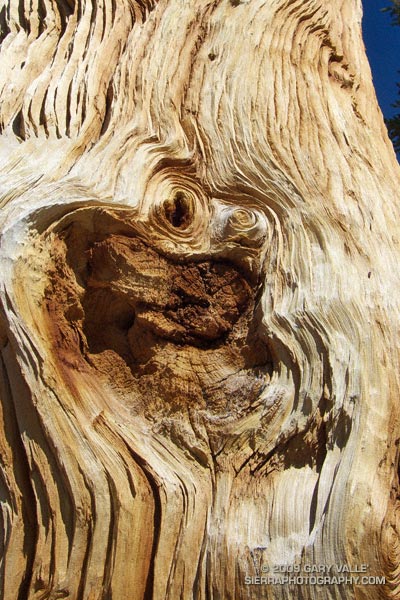 The windward side of this foxtail pine snag has been blasted by the icy winds of a multitude of Winter storms. The wind has sculpted the mineral-like wood, exposing and accentuating its inner layers.

The photo is from last Saturday’s Cottonwood Pass – New Army Pass trail run. Nearly all of this route is above 10,000 ft. and 12 miles of it are above 11,000 ft. This relatively dry, high altitude habitat is home to the southern foxtail pine (Pinus balfouriana subsp. austrina).

One of the less common Sierra conifers, the tree is a long-lived species that is closely related to the bristlecone pine. The FEIS database references a southern foxtail pine 3400 years old, and the Gymnosperm Database a specimen with a crossdated age of 2110 years.

Because the tree grows so slowly, the wood is dense, and dead trees are slow to decay. In the vicinity of Cirque Peak, and a few other areas, dead foxtail pines and remnants are found above the current tree line. By crossdating tree ring sequences, a study published in 1997 found that over the past 3500 years the tree line in this part of the Sierra has generally been higher than it is now.

The study deduced that one period of reduced tree abundance and lowered tree line elevation was associated with warmer temperatures, and at least two severe multi-decade droughts. In contrast, the most recent decline has occurred during a cold, wet period that started about 450 BP.

It is remarkable that some of the dead foxtail pines studied here were alive during the Bronze Age, 4000 years BP. 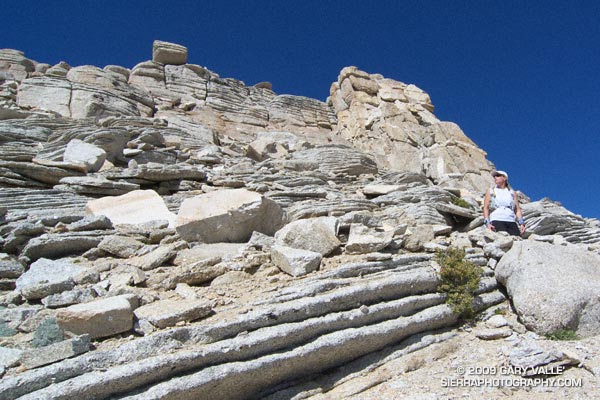 The flash of turquoise is so intense it is startling. The Mountain Bluebird flitters past, landing on a knobby plate of peppered Sierra granite. Its color is remarkable, without question a product of the mountains and the sky.

Nearby a yellow-bellied marmot waddles to a favored rock and watches us with a mix of reproach, curiosity and concern. Patience exhausted, he scurries into his den.

The wind is light and the sun bright. At 12,000 feet it is comfortably cool — a perfect day for flying along the crest, scrambling among the rocks, or running a trail.

What better place to be on a fair Fall day than high in the Sierra? 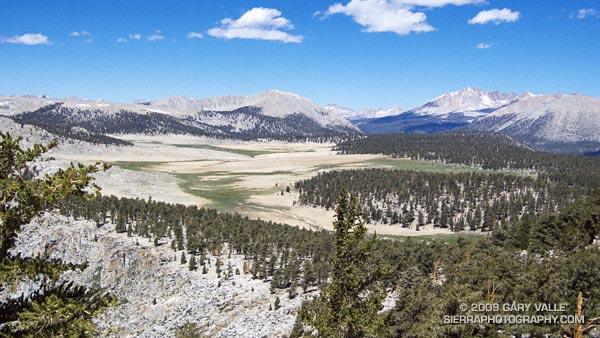 The photograph of Siberian Outpost and Mt. Kaweah was taken from the Pacific Crest Trail, north of Chicken Spring Lake, while running the 22 mile Cottonwood Pass – New Army Pass loop — an outstanding high mountain course that is nearly all above 10,000′.

The large treeless area is Siberian Outpost. Reminiscent of an expanse of tundra, an exposed camp here would certainly have the windswept, isolated character of the north. The high peak on the right side of the photograph is Mt. Kaweah (13,802′). To the left is Mt. Anna Mills and to the right, Mt. Guyot. The peaks of the Great Western Divide can be seen in the distance. Hidden from view, between Mt. Guyot and Mt. Kaweah, is the Kern (River) Trench near Kern Hot Springs.

In my experience the loop is a MUCH better run when done in the clockwise direction. Something to keep in mind, particularly in a heavy snow year, is that you approach New Army Pass from the west, and don’t get to see the snow situation on the steep, east side of New Army Pass until you get there — at about mile 13.

This wasn’t a heavy snow year, but the weather this Spring was cool and there were some late season storms. So it wasn’t a big surprise to find a steep patch of snow blocking the trail. With a light pack it was relatively straightforward to find a way around the snow, but earlier in the season, or in a heavier snow year, this might not be the case.