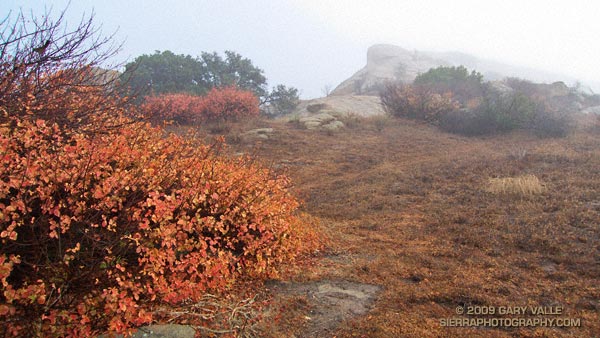 Did an enjoyable run at Sage Ranch today that started and ended in showers, but also included a few moments of subdued sun.

The shrub with the yellow-orange leaves is rain soaked poison oak. As I took the photo, a California towhee landed in its limbs, probably a little concerned about the unexpected house guest. From a towhee point of view, a thick chaparral shrub is a homey place with all of the creature comforts.

In chaparral areas towhees are common, and I frequently see them on my runs. Over years of running I’ve learned some of their habits.

Many times when I encounter a towhee on the trail, it will flutter and scurry along the ground just ahead of me, and then dart into a bush. Although not as dramatic as the broken wing act of a killdeer, this “catch me if you can” behavior is probably intended to draw a potential predator away from the bird’s nesting and living area.

Very different animals will often cooperate to benefit each other. In the case of a towhee, one of its best buds is apparently the cottontail rabbit. On occasion I will see the bird and rabbit foraging together on a trail. When trying to keep a wary eye out for potential predators, four eyes are much better than two.

Where there is one towhee, there will often be another nearby — presumably its mate. At Sage Ranch, I’ve repeatedly encountered a pair of towhees near a particular shrub over a period of several years.