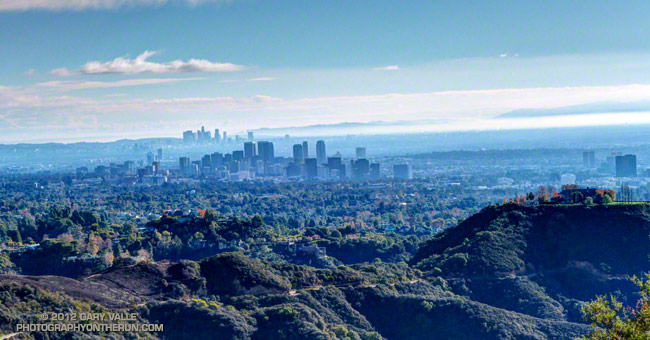 Sometimes it gets chilly in Los Angeles. The temperature at Downtown Los Angeles (USC) dipped to 39°F last night. That’s about eight degrees below normal and only a couple of degrees away from tieing the record for the date.

It gets colder in the valleys. The temperature was in the mid-30s when I started my run at the ‘End of Reseda’ on the San Fernando Valley side of the Santa Monica Mountains. I was headed over the hill to Will Rogers State Park, then to Temescal Canyon, and then back to Reseda.

When you start a long run on a cool day just as the sun is coming up it’s hard to know what clothing you’re really going to need. In Southern California it seems more times than not the extra shirt goes into the pack a mile into the run and stays there.

The running was excellent on the Will Rogers segment of the Backbone Trail. I hadn’t been on this segment since last Winter and much work had been done on the trail. Even with yesterday’s rain the trail was in good shape.

This time I didn’t mind so much that I had an extra shirt in the pack. The day had dawned mostly clear with a few scattered and tattered clouds, but by the time I was headed back to the valley it was nearly overcast. It was breezy and cool and there were some big buildups to the south and east of the city. It looked like a shower might pop up at any time.