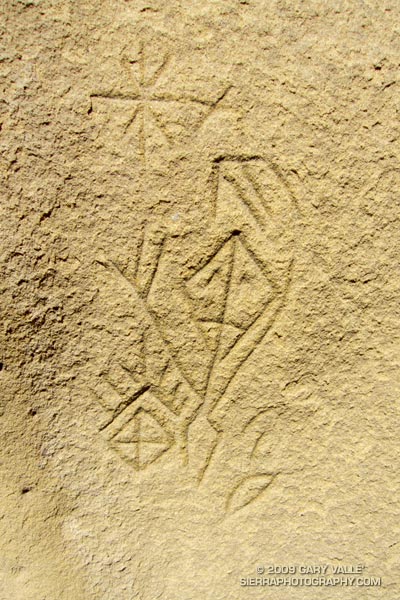 There is nothing quite so compelling as an unanswered question.

Several years ago, in the middle of a trail run, an unusually shaped rock formation caught my eye. After a little bushwhacking and exploration, I found a way to climb the formation, and on its summit found a small pictograph. I wondered if there might be other pictographs in the area, and on the way back to the trail found the inscription pictured above.

Later, I took a friend with more ethnographic experience to the top of the rock, and it was his opinion that the pictograph, as well as the nearby inscription, were not of modern origin. He also mentioned that the rock likely marked the point on the southeastern horizon where the sun rises on the Winter Solstice, as seen from a Chumash shrine several miles away. 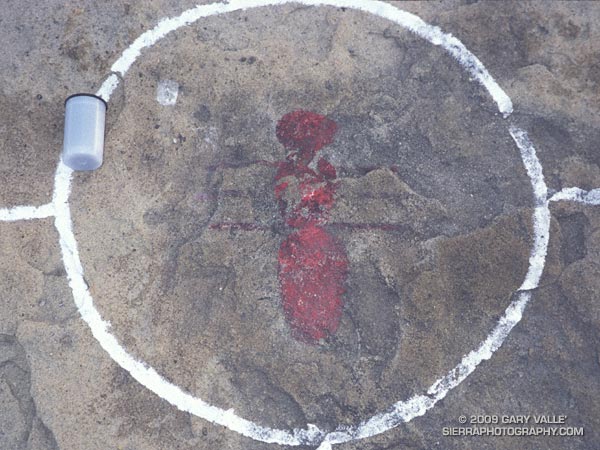 The pictograph on the solstice rock appears to have been painted using an ochre pigment, which may have been mixed in an adjacent cupule. It is in a harsh environment, fully exposed to the sun, wind and rain. It’s my guess that the white “alignment” reticule surrounding the pictograph is an unfortunate recent addition.

The petroglyph is in a concavity on the north side of a large boulder, and is better protected. That the drawing appears to be astronomical in nature, and is adjacent to a rock possibly used to mark the Winter solstice is probably not a coincidence.

To speculate on the purpose and meaning of such a drawing is to travel in time, and through the thoughts and eyes of another, visit a world far different than our own.

In this case that someone was probably an ‘alchuklash — an astronomer-priest-shaman who was a part of a religious-spiritual cult known as the ‘antap — a pervasive power elite within Chumash society.

The ‘alchuklash were adept astronomers, not only observing the Winter and Summer Solstices, but the moon, individual stars, asterisms, constellations, planets, Milky Way, eclipses and more. The observation and interpretation of the Upper World were an integral part of the Chumash cultural and world view.

But the Upper World did not exist on its own. The Chumash appreciated and celebrated the interdependency of Nature, and events in the Upper and Lower Worlds were inexorably tied to those in the Middle World of everyday existence. Using their specialized knowledge, the ‘antap facilitated communication and interaction between these worlds to the benefit, or peril, of the People.

It is in this context that in the drawing I see the powerful personage of an ‘alchuklash, who has reached into the Upper World. Perhaps the drawing is a commemoration of the power of the place. Perhaps it is a kind of owner’s manual, a premodern PDF, illustrating the purpose of the solstice rock. Or, perhaps it is something we cannot know.

Note: The contrast of the lines in the image has been increased to make them easier to see. In the ten years since I first photographed the etching, some detail has been lost in the lower right corner of the drawing. This image is from April 21, 2009.