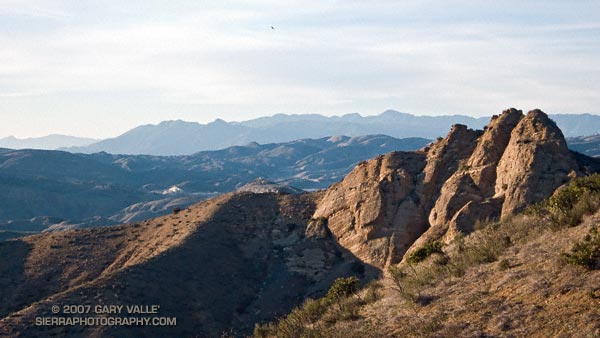 View northwest to the Ventura Mountains from the Chumash Trail. The highest peak on the skyline is Hines Peak (6716′), about 28 miles distant. Here’s a larger version of the 16:9 format image. Note the hawk soaring high above the terrain.

I run the Chumash Trail frequently, but had not seen the bulldozed track on the steep slope near the start of the trail. The trail hasn’t been re-routed. Apparently on the 13th a 4WD truck that was part of a fire department response to a cycling accident got stuck, and a bulldozer was called in to extricate the vehicle. I’ve been told the Park District and Mountains Conservancy are considering next steps.