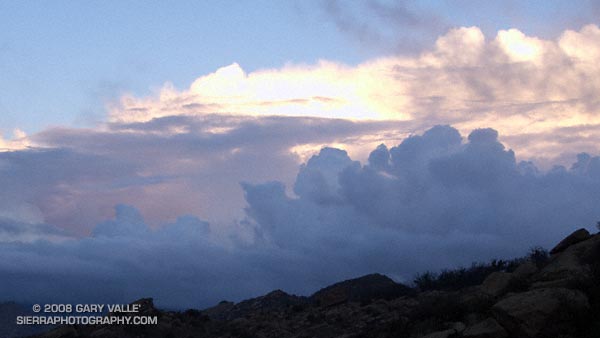 Update 12/5/08 P.M. High amplitude flow continues to wreak havoc with forecasts. Our on-again, off-again chance of a shower this weekend might be on again. Original cut-off upper low center is still well offshore, but another low center has developed on the downstream side of high amplitude ridge, and this one is much closer to the Southern California coast. The low appears to be entraining some moisture, and could produce some showers, particularly as the low moves onshore and is absorbed in the main flow. We’ll see!

Update 12/5/08 A.M. No rain is expected in SoCal this weekend… The cut-off upper low set up much further west than suggested by models Tuesday and now is spinning out in the eastern Pacific, nearly halfway to Hawaii. At the moment, it looks like it could be mid-month before our next chance for significant rain.

Update 12/2/08. Computer models have been having a tough time with both the short and medium term forecasts for Southern California. Recent runs have been hinting at the possibility of some rain Saturday or Sunday. This would depend on the strength, position and behavior of an upper low that is forecast to form off the Southern California coast Thursday.

From a run at Sage Ranch Park, near Simi Valley, California.