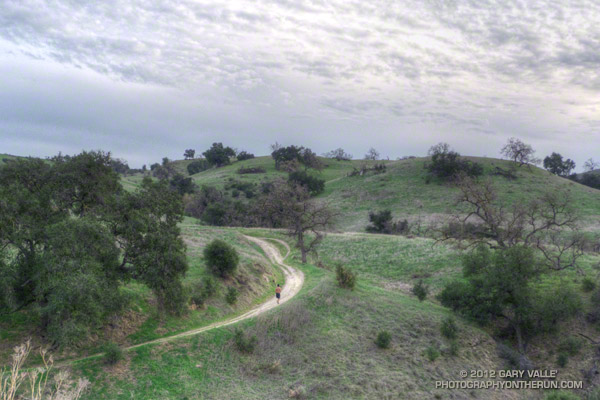 The Cheeseboro RAWS, a couple of miles west of where this photograph was taken, is usually a good indicator of the weather in the Ahmanson Ranch area. The automated weather station recorded a paltry 0.01 inch of rain Tuesday. While this was enough to dampen the trails and create a little mud, it didn’t help much with our low water year precipitation totals.

Downtown Los Angeles (USC) also recorded 0.01 inch of rain Tuesday, bringing the water year (July 1 to June 30) total to 5.07 inches, or about 60% of normal. Some areas have had a little more rain and some a lot less. According to NWS data the Santa Barbara water year rainfall total stands at about 69% of normal, while Burbank out in the Valley has recorded only about 44% of the normal amount of rain.

Central California isn’t doing any better. Downtown San Francisco has only recorded about 42% of normal rainfall and Sacramento 45% of normal. In the first full Sierra snow survey of the season, basin averages ranged from about 28% to 54% of the normal snowpack, with a statewide weighted average of 35%.

The medium range weather models are forecasting a series of shortwave troughs will move through Southern California over the next 10 days. At the moment the systems aren’t forecast to produce much rain in the Los Angeles, but maybe that will change. We’ll see!

The photograph is from a run last week. The road leads up to Lasky Mesa in Upper Las Virgenes Canyon Open Space Preserve (formerly Ahmanson Ranch).