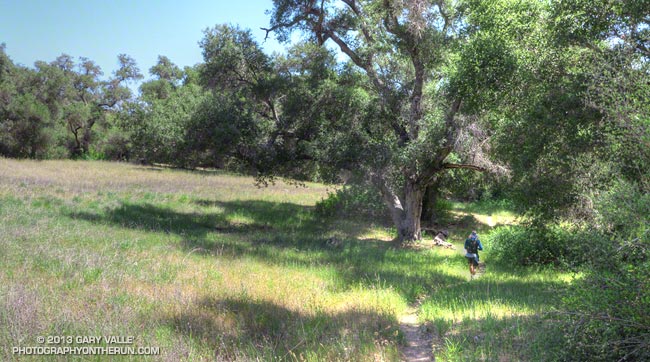 The Front Country views on the Cold Spring Trail are spectacular, and the Back Country segment from Forbush to Blue Canyon has a classic, isolated character, accentuated by grassy flats, sprawling oaks, gurgling springs and unique geology. Montecito Peak (3214′) can be climbed on the way up the Cold Spring Trail and depending on how much time you spend on the summit, adds about 15 minutes.

I was running with Kevin Young, whom I’d met during the Backbone Ultra. Kevin is long-time resident of Santa Barbara and this is just one of the challenging routes in his backyard. As is the case with many trail runs, the mileage of this loop — about 22 miles — isn’t the best indicator of its difficulty. Many variations of the loop are possible, but one thing they all have in common is lots of elevation gain.

Thanks to the marine layer it was cool along the immediate coast, but inland temps were hot. When we started the run the temperature at the Montecito RAWS was 60°F. A few hours later when we were climbing out of Blue Canyon on the memorably steep Romero Trail the in-the-sun temperature at nearby Los Prietos was around 100°F.

Having done this loop a number of times, Kevin knew it was longer than it looked, and had stashed some goodies at the Romero trailhead. You might think 100 oz. of water would be plenty for 16 miles. On a different day it might be, but today we both ran out of water part way down the Romero Trail. Neither one of us had particularly fresh legs. Kevin was training for a 100 miler later in May and had run 20 miles the day before.

The PB & J sandwich at Romero hit the spot, but after drinking a 16 oz. recovery drink, half of a large bottle of water, and some Gatorade, I wondered if I had overdone the fluids. Nope — it actually helped a lot and my running attitude improved considerably.

Kevin’s route back to the Cold Spring trailhead from Romero initially followed the Nine Trails course on the Edison Catway, but after reaching the Buena Vista Trail continued down to Park Lane. Here we picked up the Old Pueblo Trail, and then worked across to the McMenemy Trail. We followed the McMenemy Trail to the Hot Springs Trail, which we took down to Mountain Drive. From the Hot Springs trailhead it was about a mile on Mountain Drive back to the Cold Spring trailhead. Even though it had a lot of up and down, this part of the run turned out to be surprisingly cool and enjoyable.

For maps of the area see the Santa Barbara Hikes web sites.

Here’s a slideshow with a few photos from the run. We did this run last Sunday, April 28.