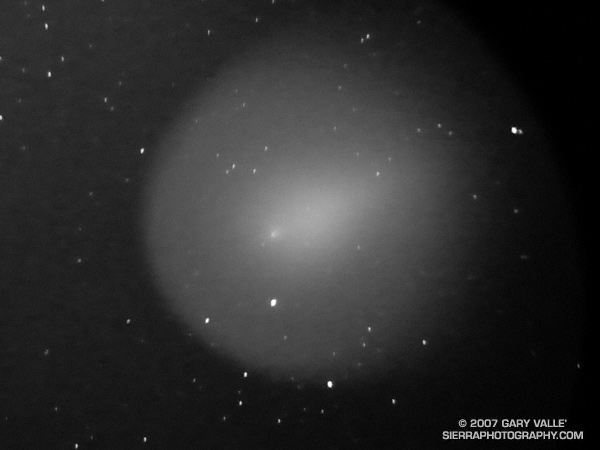 Image of Comet Holmes 17/P taken in the light pollution of the San Fernando Valley, near Los Angeles. It was photographed through the eyepiece of a 5 in. telescope (SCT) using one of my “running” cameras — a 10 Mp compact digital.

An exposure of 60 seconds was used. The raw format image was pushed 2.5 stops and the tone curve adjusted in Adobe Camera Raw to bring out detail in the diffuse outer coma of the comet. The image was flipped so that it is not reversed and is upright.

The comet’s nucleus is at about 8:00 o’clock, near the head of the more dense and bright inner coma. A hint of a tail can be seen projecting in the 2:00 o’clock direction. The tail of the comet isn’t more obvious because from Earth we’re seeing the comet almost head-on.

This illustration, generated using Starry Night Pro, shows the position of Comet Holmes 17/P on 11/13/07 – beyond the orbit of Mars – and its relationship to the Earth, Sun and the plane of the solar system. An orbit visualization and much more info is available on the Comet 17P/Holmes page on TheSkyLive.