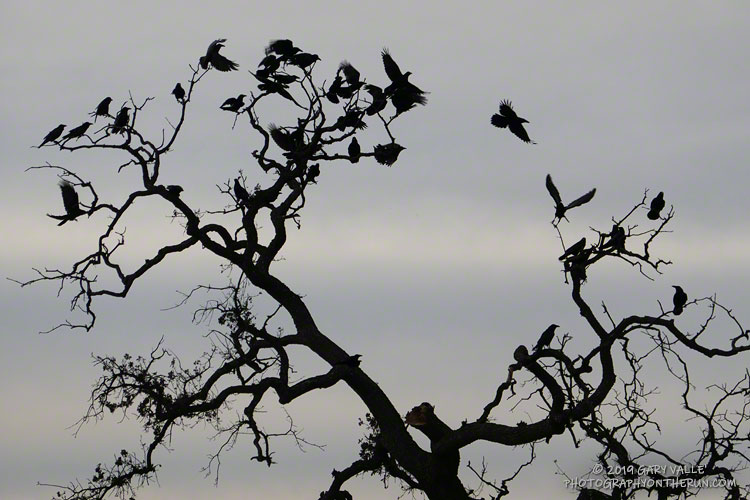 Crows have been congregating on the west end of Lasky Mesa this Fall, and the number appears to be increasing. On a run earlier this week, a friend and I watched four crows chase a small bird — probably a kestrel — off the west side of the mesa.

Winter gatherings of crows are not uncommon. NPR recently aired a story about the problems created by thousands of Winter-roosting crows in Rochester, Minnesota. Closer to home, and on a smaller scale, in January 2017 I was astonished to see hundreds of crows circling about in Cheeseboro Canyon.

The Cheeseboro Canyon gathering was transient, and I hope the one on Lasky Mesa is temporary as well. Too many of the brash birds could adversely impact the limited number of kestrels and other notable birds that call Lasky Mesa home.

Follow-up on January 15, 2020. On several occasions have seen flocks of crows flying west from Lasky Mesa, toward Las Virgenes Canyon. When conditions permit, the crows use thermals to gain altitude and continue west. I’ve also noticed a general westerly flight trend of small groups of crows flying across Lasky Mesa. It may be that Lasky Mesa is a convenient waypoint on their way to a roosting/breeding location farther to the west.

Follow-up on January 3, 2020. Today, a kestrel was back in the valley oak on the west end of Lasky Mesa. No crows were nearby. Later in the run I came across a small group of crows pestering a pair of northern harriers.

Follow-up on December 19, 2019. While I’ve seen some small groups of crows in the Lasky Mesa area this week, the large congregation appears to have dispersed.

Some related posts: Under a Falcon’s Eye, Bird Games, Crows in Cheeseboro Canyon, A Raven Story