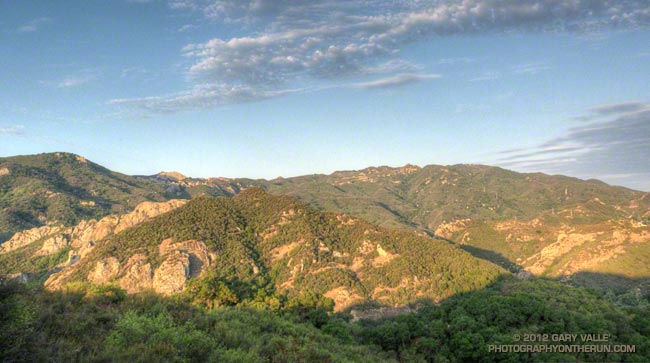 Following two weeks of scorching temperatures and a torrid Mt. Disappointment 50K, it looks like we’re going to catch a break and the weather for the Bulldog 50K/25K this Saturday is going to be cooler — cooler than last year and cooler than what we’ve been seeing recently.

How much cooler? During our recent heat wave the Malibu Canyon Remote Automated Weather Station (RAWS) near Tapia Park recorded temps as high as 102°F, and highs were routinely in the 90s. On race day last year temps here topped out at 101°F. Yesterday the high was 80°F and forecasts suggest the high Saturday should be about the same.

But for runners these temps don’t tell the whole story. These are “in the shade” temps recorded by a specially shielded and ventilated sensor. In addition, the humidity — even if it’s not East Coast humid — can have a big impact on what the temperature feels like and how it affects running performance.

Humidity can also play an important role and it doesn’t have to be super-high humidity to affect a runner. The NWS Heat Index attempts to account for the combined effect of temperature and humidity. Heat index tables can be misleading. As the NWS notes, “…heat index values were devised for shady, light wind conditions, exposure to full sunshine can increase heat index values by up to 15°F.”

Last year at around 3:00 pm when the last few runners were making their way up the Tapia Spur Trail the “in the shade” air temperature recorded by the Malibu Canyon RAWS (near Tapia Park) was 99°F, but the “in the sun” fuel temperature was 114°F. The dew point (a measure of humidity) at the time was 63°F, and this would have pushed the “feels like” temperature even higher.

Update Sunday, August 26, 2012, 12:00 pm. Race day (Saturday) at Malibu Creek State Park dawned cool and cloudy with the marine layer once again about 2200′ deep. At the beginning of the race the temperature at the Malibu Canyon RAWS (near Tapia Park) was 63°F. As on Friday the marine layer didn’t start to break up until around 9:45 am, so for many runners the entire first loop was cloudy and relatively cool. The first time up Bulldog we ran up into the clouds and eventually broke out above the cloud deck near the top of the climb — it was spectacular! The clouds had cleared by the time I reached the Bulldog aid station on the second loop. Even though temps were warmer the second time around, it seemed that just when you needed it there was always a cooling breeze!

Update Friday, August 24, 2012, 8:00 am.
NWS Los Angeles/Oxnard reports marine layer about 2200′ deep this morning. The top of the Bulldog climb is at about 2400′ ASL. The extent of the low clouds and fog can be seen on various CalTrans cameras along the 101 Frwy via SigAlert.com. A marine layer this deep will probably delay clearing and keep temps cooler. Yesterday at 11:00 am the Malibu Canyon RAWS (near Tapia Park) reported an “in the shade” air temperature of 71°F and an “in the sun” fuel temperature of 90°F. Temps peaked at about 2:00 pm with an air temp of 79°F and a fuel temp of 100°F. We’ll see what happens today!

Thursday, August 23, 2012. At the moment it looks like the “in the shade” temperature at 11:00 am race day near Tapia Park should be around 78degF, with an “in the sun” temp approaching 100degF. The marine layer depth at the start of the race should be around 1000′ with a layer of low clouds (possibly broken) that should clear before most of us complete the first 25K. We’ll see!

The title photo is from a run in Malibu Creek State Park on Saturday. The Bulldog climb is on the right side of the photograph. The Corral Canyon aid station is on the low point of the skyline a little left of center, and the “gateway” rocks farther left on the skyline.