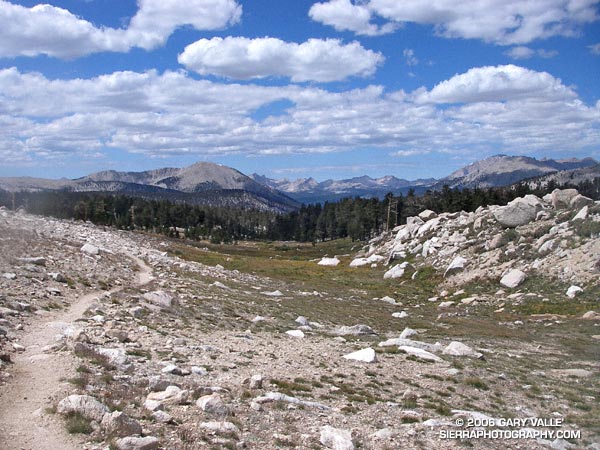 The climb up the glacier sculpted canyon hadn’t been too bad. How could it be on a day like this? Winds were light, and the temperature was refreshingly cool – perfect for running in shorts and a lightweight long-sleeve top. As I had worked up the Rock Creek trail, marmots, fat for the Winter, had whistled warnings of my approach and then waddled for cover. Amicable clouds embellished the high mountain sky, and sun-chased shadows quietly set the pace. 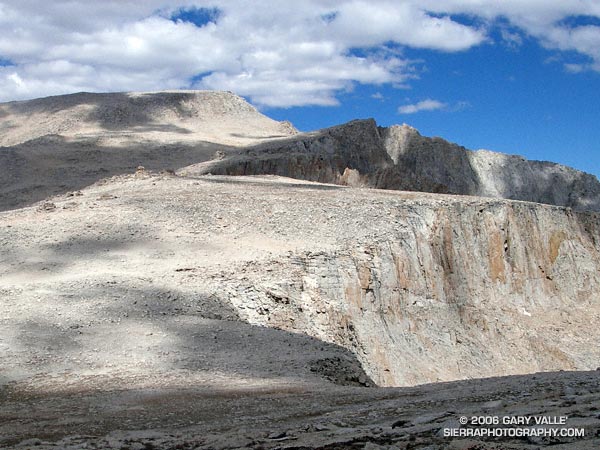 Atop New Army Pass, I marveled at the diverse landscape. To the north loomed the massive hulk of Mt. Langley. Invitingly close, I had climbed the peak from this point several times before. Today, the additional 5 miles and 2300′ in elevation gain were not part of the plan. Just a few hours before I had been in the San Fernando Valley at an elevation of 800′. Now above 12,000′, I was happy to feel more or less normal, be able to run the flats and downhills, and enjoy the day. (See the note regarding altitude sickness and acclimatization at the end of this post.)

New Army Pass (12,300′) is at about mile 12 of the approximately 21 mile loop. On May 1 California Cooperative Snow Surveys reported the Southern Section Sierra snowpack at 177% of normal. Four months and a very hot summer later, remnants of that snow could still be seen on the Sierra crest near the pass. 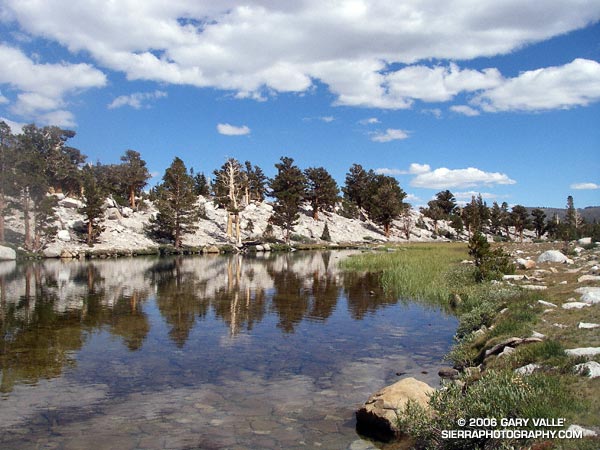 My route had started at Horseshoe Meadow, climbed to Cottonwood Pass, and then followed the Pacific Crest Trail and a connecting trail to the Rock Creek trail. From New Army Pass the route would drop down to Long Lake, and then head east to Cottonwood Creek, where it would follow a roundabout route back to the trailhead.

Nearly the entire loop is at or above 10,000′, and almost 12 miles of it are above 11,000′. Many miles of the route are in stands of hardy and picturesque Southern Foxtail Pine. A close relative of the Bristlecone Pine, Foxtail Pines can live to be more than 3000 years old.

In places along the crest, impervious trunks of long dead Foxtail Pines lay in the talus. Many of these ancient trees are larger than the live Foxtail Pines surrounding them. In some cases the relic trees are found above the current treeline – a stark reminder of the changeable nature of Earth’s climate.

The title photograph was taken on the Rock Creek Trail at an elevation of about 11,200′ looking west. Mt. Anna Mills is the sunlit peak on the left, and Mt. Guyot is the peak on the right. In the distance are peaks of the Great Western Divide. An USGS aerial photograph of the area suggests that the mound of rocks to the right of the trail may be a moraine associated with a small rock glacier. The red arrow in the aerial photo indicates the approximate position and direction of the photo on the trail. It could be the feature originated as a landslide, but semi-concentric surface ridges in the debris appear to be evidence of fluid motion at some point in the past.

Note: There is much information available on the Internet regarding altitude sickness and acclimatization. As a starting point see International Society for Mountain Medicine: An Altitude Tutorial and Wikipedia: Altitude sickness.