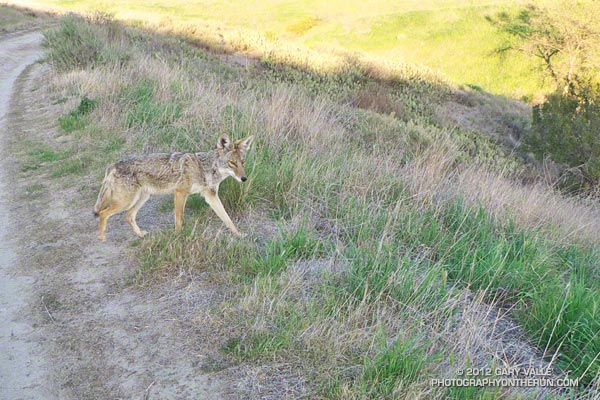 Last June I had an unusual encounter with a coyote near the end of a run at Ahmanson Ranch (Upper Las Virgenes Canyon Open Space Preserve). For reasons known only to the coyote, the animal behaved like a dog and ran with me a short distance along a dirt road. Not off to the side of the road, or at a distance, but as if on lead and out for a daily jaunt. Today, on the same section of road, I had another odd encounter with a coyote.

This time I rounded a corner to see a coyote calmly trotting down the middle of the dirt road toward me. No big deal, it would do what a coyote normally does — see me and head for the brush. Except it didn’t. This time it continued to trot in my direction. Fifty, thirty, twenty feet — the gap between us closed. Watching each other intently, we stopped about 12 feet apart.

For a few moments we stared at each other, my expression no doubt showing the same mix of wariness and curiosity as the coyote’s. In the practiced motion of something wild, the coyote briefly raised its head, sampling scents of its world on the wind. I edged closer — not daring to raise my camera, but taking the occasional photo.

A few more seconds passed, then apparently deciding enough was enough, the animal sauntered into the grass.

Coyotes are opportunists and I’m guessing these close encounters are related to an association of people with food — perhaps discarded food or food intentionally provided. Coyotes also associate people with their pets. Recently I saw a pair of coyotes behaving oddly (also at Ahmanson) and nearby an individual was walking their small dog off lead.