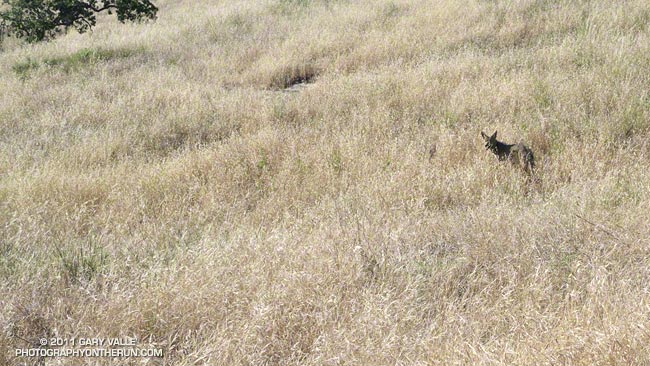 I was deep in thought, but have no idea what those thoughts might have been. It was at that point in a run when miles, and thoughts, flow freely. The afternoon was warm and calm and the settling sun cast a golden hue on the blond, oak-studded hills. My footfalls ticked out a steady rhythm on the dirt road, and my mind was at ease.

My reverie was suddenly broken by the realization that a coyote was running with me. Not running yards in the distance, or in the brush off to the side, but five or six feet in front of me, as if restrained by an invisible lead!

It must have come from the tall grass along the margin of the road, but from my daydream-warped perspective had just suddenly appeared. I’m surprised I didn’t stumble or start. But there was no hint of aggression or malice — just a mischievous glance backward to see how I was going to react.

I didn’t. I’ve had numerous encounters with coyotes, but this went so far beyond my other experiences, I didn’t know how to react.

For more than 50 yards the coyote ran with me, keeping pace in lead along the deserted dirt road.

At some point I started to try and retrieve my camera from the small pack on my waist. The out of synch movement disturbed the delicate balance of this improbable scene, and I could see the change in the animal’s demeanor.

Before disappearing into the cover, the coyote looked back a final time, and in so many words seemed to be saying “gotcha, you’re it!”