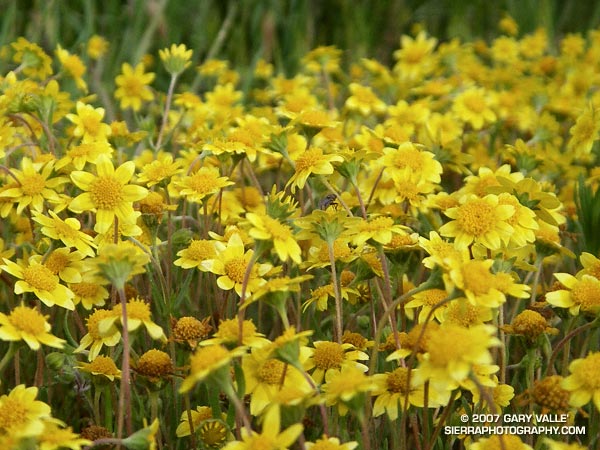 This photograph of goldfields (Lasthenia spp.) was taken on a run on Lasky Mesa in Upper Las Virgenes Canyon Open Space Preserve (formerly Ahmanson Ranch) almost exactly one year ago.

This April I haven’t seen any goldfields on Lasky Mesa. The soil is too dry for the seeds to germinate. The drought in Southern California has suppressed or delayed the growth of these, and many other species of wildflowers. This is one of the ways that annuals deal with drought — if the growing conditions aren’t appropriate, they don’t grow.

Black mustard, an invasive annual from Europe, is a hardy plant that is a good indicator of Winter rainfall. In 2005 and 2006 the mustard at Ahmanson Ranch was 6′ to 8′ tall and very widespread. This year its growth has been very limited, and the plants are diminutive in comparison.

According to the NWS, if Los Angeles (USC) receives less than 1.95 inches of rain between now and June 30th, this water year (July 1, 2006 to June 30, 2007) will become the driest since recordkeeping began in 1877. At this point in the season, a new record seems more likely than not.