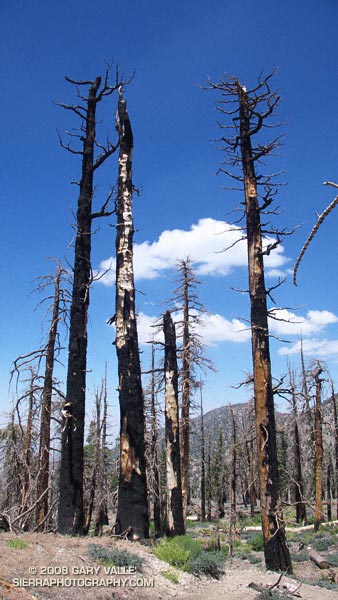 Or did the Curve Fire trigger a lightning strike?

These trees — on a section of the Pacific Crest Trail east of Windy Gap — were burned almost six years ago in the 20,857 acre Curve Fire. According to the Curve Fire Burned Area Emergency Report Implementation Plan, the source of ignition for the devastating fire was “a ritual involving the use of fire (candles) and animal sacrifices.” The fire started the afternoon of September 1, 2002.

However, in the document An Exercise Involving Flash Flood and Lightning Potential Forecasts, an alternative ignition source was suggested — an “out of the blue” lightning strike. Forecasters observed a “single positive lightning strike northeast of the Mount Wilson Observatory” about 1:00 PM PDT (2000Z), near the time the Curve Fire started. According to NWS Lightning Safety Outdoors, such bolts from the blue have been documented to travel more than 25 miles from a thunderstorm cloud.

While there is compelling evidence that the blue sky lightning strike occurred, the time of the strike suggests that it was not the initial source of ignition of the Curve Fire. This UCLA Solar Towercam image is time-stamped at 12:58:58, about the time of the strike. It shows the Curve Fire already underway, with a well-developed smoke column. The photograph also shows the cloud development over the San Gabriel Mountains.

An intriguing question comes to mind. Was the lightning strike a coincidence, or was it somehow triggered by the fire, or the smoke?

According to “Forest Fires: Behavior and Ecological Effects” by Edward A. Johnson, Kiyoko Miyanishi (Academic Press, 2001) large scale lightning detection networks have revealed an association between forest fires and the electrification of thunderstorms. Further, “a shift from negative to positive ground flash prevalence in association with fires and forest fire smoke” has been documented.

The photograph of trees burned in the Curve Fire is from Sunday’s Islip Saddle – Mt. Baden-Powell South Fork run.