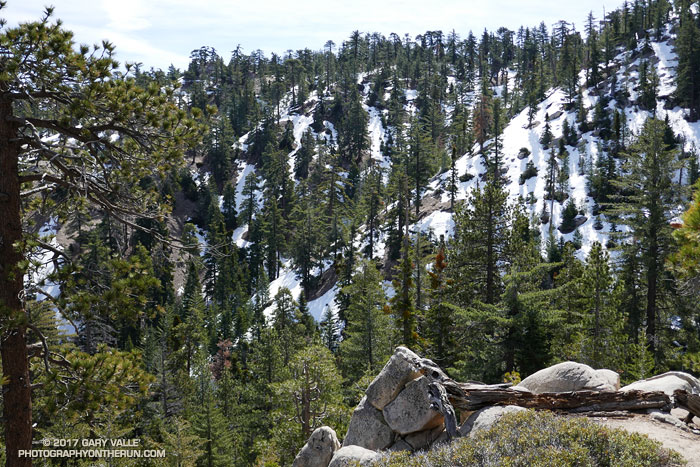 Climbing up the slope and around the big incense cedar I stopped for a moment to enjoy the smell of the splintered wood. There had been so many trees across the trail I’d lost count. This was in the neighborhood of the 35th tree I’d had to work around on my way to Mt. Waterman.

My run on the Mt. Waterman & Twin Peaks Trail had started at Three Points. Initially, I’d been encouraged to see some trees had been cut and removed from the trail. But the area was hard hit by the 2009 Station Fire and the combination of fire, years of drought, and rough winter weather seemed to be felling an increasing number of trees each year.

Across the canyon the north face of Twin Peaks was still blanketed in snow. On this warm, south-facing slope the snow was almost gone, exposing a veneer of pine needles, last Summer’s gray and wilted ferns, and the Winter excavations of industrious moles. In every gulch and gully water spilled down the mountainside; splashing, bubbling and burbling downslope under gravity’s spell.

This was supposed to be a recovery run, following last Saturday’s abridged — but arduous — run on the Backbone Trail. (Many thanks to Howard & Mike and all the volunteers!) The plan was to just go to the summit of Waterman and then back down the same way. But… the idea of crawling over, through or around more than 40 trees a second time just didn’t sound that appealing.

When I reached the junction with Mt. Waterman’s summit trail it took about a millisecond to make the decision to continue on the loop. It would be longer, and would have more elevation gain, but it was a beautiful day and my legs felt OK. Who knew when there would be another opportunity to do the loop in these conditions?

Much of the trail down to Buckhorn was covered with snow. Not so much snow as to be a problem, but enough to be interesting and scenic. The weather was great and snow conditions excellent. Following the tracks of hikers, my socks didn’t even get wet!

Reaching Angeles Crest Highway, I ran east a short distance to the entrance of Buckhorn Campground. The gate was locked and the campground still closed for the Winter. Patches of snow, deadfall and other debris littered the area. When the camp is open, I top off my water here. Today the faucets were dry, but with the cool weather that would not be an issue.

Most of the hikers on the Burkhart Trail were going to see Cooper Canyon Falls. Seeing the falls was one of the reasons I’d decided to continue on the loop. My thoughts drifted back to April 1995 when Gary Gunder and I carried our kayaks down this trail and paddled Little Rock Creek from Cooper Canyon to the South Fork. (We put-in below the falls.)

The flow over the falls was the most I’d seen in several years and was probably nearing its peak. After enjoying the falls for a few minutes I scrambled out of the gorge and headed up the PCT. Like all that visit the falls, I now had to climb out of Cooper Canyon.

The effects of a prolonged drought don’t just disappear overnight, no matter how much it rains or snows. This was particularly evident on the sun-baked segment of the PCT above Cooper Canyon Camp. Just above the camp a large, green-needled Jeffry Pine had collapsed, leaving a large crater where its roots had been. In the year since I’d been on the trail, trees on the warmest, south-facing slopes had become more drought-stressed. It seemed additional trees had died and more had yellowing and brown needles.

Cooper Canyon can be hot, but today the temperature was pleasant. Eventually I reached Cloudburst Summit and clambered over a final steep patch of snow to reach the saddle. Three Points was now just a few miles away. I crossed Hwy 2 and started running down the trail.