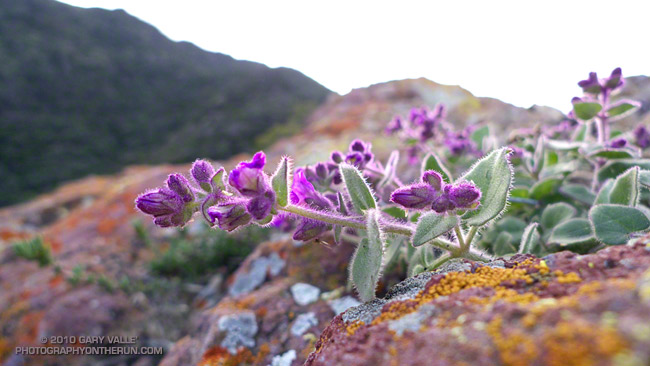 This autumn, the first measurable rainfall at Downtown Los Angeles was on October 4, 2010. Since then we’ve seen some rain in Southern California every 7 to 10 days or so. The storms haven’t been huge, but many locations have recorded near to above average rainfall for the water year to date. Some, like Santa Barbara and San Diego, are well above normal for the date.

Because of our erratic weather, many Southern California plants are opportunistic and will shift their growing and flowering season to take advantage of wet weather.

Discounting plants that normally bloom in autumn, one of the earliest of the early bloomers this autumn was this bigpod ceanothus in Pt. Mugu State Park, photographed on November 14. Another early bloomer was Wishbone Bush which was beginning to bloom in the Simi Hills on November 21. This Shooting Star was photographed at Sage Ranch on November 30. In the past couple of weeks I’ve also seen Prickly Phlox, Bush Monkeyflower and Wild Cucumber in bloom.

The title photograph is Wishbone Bush on the northeast ridge of Ladyface last week.