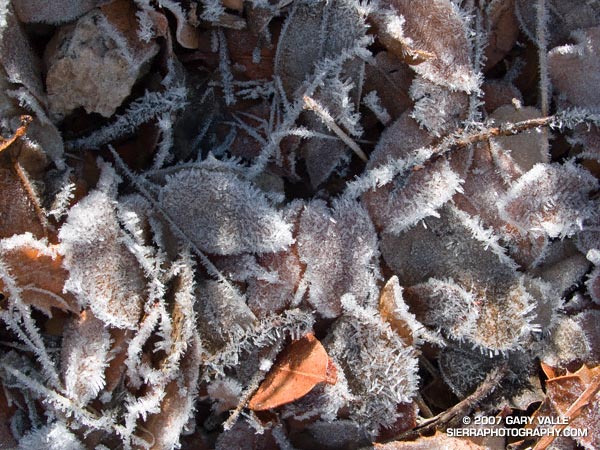 When I see crystals of hoar frost sparkle in the Winter sun it triggers a child-like awe. On Sunday’s Condor Peak Trail Run, several sections of trail glittered as we ran into a low morning sun. On the cold east face of Fox Mountain, a fine, needle-like frost coated the edges and surfaces of leaves and twigs that had collected in pockets on the steep slope.

Digitally magnifying a small section of a 10 Mp image revealed that the frost is comprised of  hollow columns, and further magnification shows that the columns are hexagonal, with lengthwise facets.

This type  of frost – hollow columnar hoarfrost – is described in STUDIES OF FROST AND ICE CRYSTALS by W.A. Bentley, in the Monthly Weather Review, Volume 35, Issue 9 (September 1907), pp. 397-403. Here is an excerpt:

“When formed in the open, they are essentially mild-weather types. They are most common to early autumn and late spring, and the hoarfrost that collects upon the plants and grasses during the so-called destructive frosts at those dates is almost invariably of this type. Hoarfrost deposits of this character form in the open during calm, clear nights when the surface air temperatures range from 56 degrees to 40 degrees at nightfall, and from 33 degrees to 25 degrees during the latter part of the night or early morning.”

Here is a graph of weather data recorded by the Mill Creek (ANF) RAWS on December 1 and December 2. The elevation of the station is 3510′ and it is about 8.5 miles from Fox Mountain (5033′). Parameters graphed are the hourly average wind speed, air temperature, fuel temperature, relative humidity, and dew point.