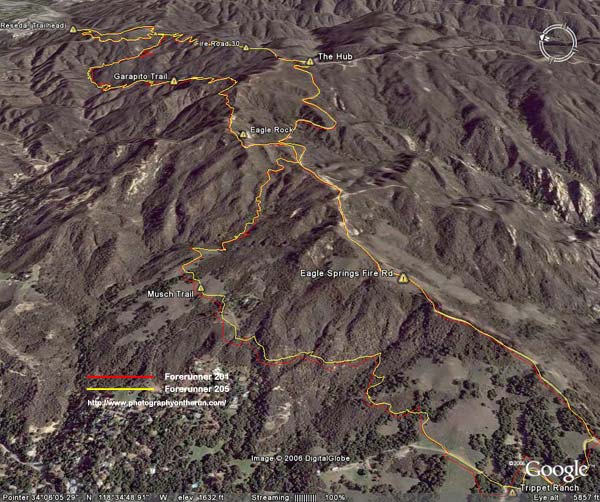 The Google Earth image above shows two GPS traces. Here’s a larger image. The red trace was created using a Garmin Forerunner 201, and the yellow trace was created with a Forerunner 205. The course is comprised of a mix of fire roads and trails, through a variety of terrain and cover. The better tracking of the Forerunner 205 is clearly evident. Here is another view of the same course with the two traces.

The performance of the GPS receiver in the Forerunner 205 continues to amaze me. It is tenacious. I was wearing the Forerunner 205 when I got caught in a fierce thunderstorm running in the Mt. Pinos area in July. Even in the middle of a thunderstorm, on a north facing slope, in a fir and pine forest, the unit did not lose reception. Here’s a Forerunner 205 trace of the run, exported from TOPO! Note that the traces going out and coming back very nearly overlay each other. The only exception is a real deviation between Sawmill Mountain and Mt. Pinos where I wandered off the trail to a minor summit. Also note that the trail is incorrectly marked on the topo map in the vicinity of Grouse Mountain.

In early October 2006, I had a problem with not being able to power on my 205 after it was charged. Garmin promptly replaced the unit, under warranty, without charge.

In June 2007 the replaced unit began to experience an intermittent issue where it would suddenly start to rapidly cycle through display screens, beep, and not respond to key presses. The only way to stop it was pressing the power + mode + reset keys. Garmin promptly replaced the unit, but charged a flat rate $79 repair fee. Oddly, when the unit was returned, the history included a few runs from the London, Ontario (Canada) area from late February and early March 2007.

It’s been over three years since the flat rate repair/replacement of my Forerunner 205, and I’ve had zero problems. One apparent improvement is that the contacts on the back no longer get corroded from sweat. This used to cause problems with the USB connection and transferring data, and I would need to clean the contacts from time to time with a pencil eraser.

In my opinion the Training Center Software is still poor, and for that reason I continue to use SportTracks.

Note: The course is the run from the end of Reseda Blvd to Trippet Ranch described in the post Musch Trail Mule Deer.