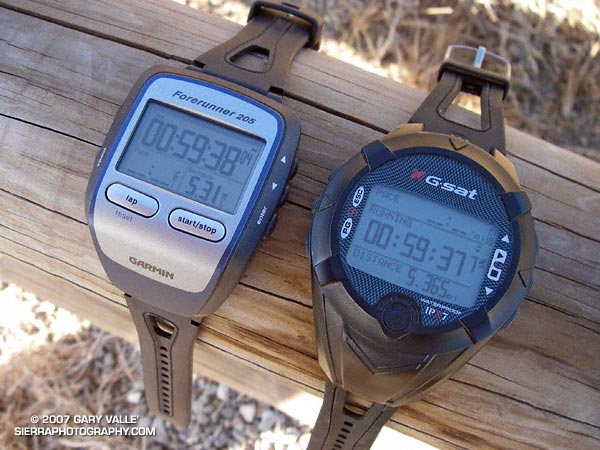 Update 7/26/08. There have been recent USB driver (4-28-08) and firmware (5-07-08) updates, and the PC software has been replaced (7-04-08), but the most significant change is that SportTracks now supports the GH615 via a plugin. Since I use SportTracks I have not looked closely at the new “g-Sports PC Utility” software, but it appears to be more functional than the original “PC Utility” software. Some significant quirks remain. When the GH615B is set to STATUTE(ft, mph) units, the elevation still displays in miles — e.g. 1.702 miles instead of 8987 ft.

Update 9/10/07. Shortly after writing this post I learned that the GH-615B has been discontinued in the U.S. in favor of the GH-615M, which includes a heart rate monitor.

Chugging up Mt. Baden-Powell, I pushed various buttons on the GlobalSat GH615B, searching for the screen that displays elevation. I had seen it on a run during the week, and now I couldn’t find it. Wait… What? My elevation is 1.702 MILES??

When my Forerunner 205 had to be returned to Garmin a second time, it seemed like a good time to see if there were any new GPS-based running watches I could use for tracing the routes of my trail runs. The description of the GH615B on the GlobalSat web site looked promising. Like the Forerunner 205/305 it had a watch-like design, and the specs said it also used the newer, more sensitive, SiRFstarIII GPS technology.

My first impression was not positive. Out of the box, with old firmware and software installed, the watch was almost unusable. Actually, I could use it, I just couldn’t do much with the data. Updating the USB driver, firmware, and PC interface software helped some. But it wasn’t until installation of the July 2007 round of updates that I could routinely transfer activity data from the watch to the “PC Utility” software, and then export a GPX file that could be imported into applications such as SportTracks and MotionBased.

Even with the July updates, the “PC Utility” software included with the GH615B is primitive. The software has no activity management features, and serves mainly as a data conversion tool. It can display track data on a Google map, or export a track to Google Earth Plus. It can also generate Altitude/Time and Speed/Time graphics, but these are rudimentary.

The GH615B’s default setting of recording one trackpoint per second will create a high resolution GPS track that will indicate almost every twist and turn of a trail. Here’s a Google Earth image that shows GPS tracks from the GH615B using the 1 second resolution setting, and the Forerunner 205 using the “Smart Recording” setting. The image shows an approximately 5 mile section of trail from Islip Saddle down to the South Fork Campground, in the San Gabriel Mountains. (These tracks were recorded on different days.)

For day to day workouts the one trackpoint per second resolution setting is probably overkill, and will produce proportionally larger GPX files than a setting of (for example) a trackpoint every 3 seconds. The GH615B does not currently have an adaptive recording option like the “Smart Recording” feature of the Forerunner 205/305, but has much more trackpoint storage capacity.

Although somewhat quirky, and not nearly as polished and feature-rich as the Forerunner 205/305, the GH615B did seem to do a good job of tracking my running routes, even in difficult terrain. With some firmware updates and bundled with decent software, it might do a better job of finding its way in the GPS-based fitness watch market.

The photograph of the GH615B and Forerunner 205 was taken at the end of a sweltering out and back run to Las Virgenes Canyon from the Victory Trailhead of Upper Las Virgenes Canyon Open Space Preserve (formerly Ahmanson Ranch) on the afternoon of August 29.