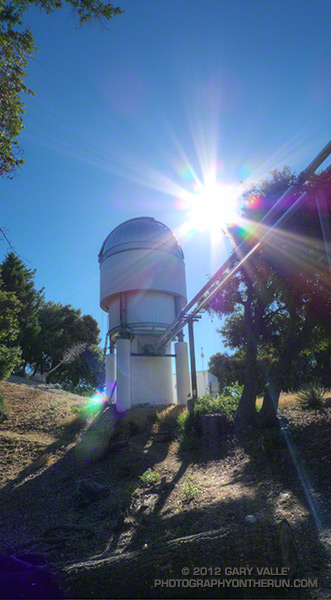 The photograph above is of telescope “E1” of Georgia State University’s six telescope CHARA optical/infrared interferometric array on Mt. Wilson. The long tubes extending from the telescope enclosure are vacuum light tubes. These carry light from each of the six one meter telescopes to a facility where the beams are processed and combined. The photograph is from a recent run on the Mt. Wilson Rim Trail.

Other things being equal, a telescope’s ability to discern detail is determined by its aperture. In a conventional telescope the aperture is the width of the main optical element. The majority of telescopes used by amateurs have apertures well under 0.5 m. Larger professional optical telescopes can range from a couple of meters up to about 10 m. The Hooker telescope on Mt. Wilson has an aperture of 2.5 m and the 200″ Hale telescope on Mt. Palomar about twice that. Hubble’s primary mirror has a diameter of 2.4 meters.

The benefit of a telescope array is that when the light from two telescopes is combined, the combined instrument’s ability to discern detail — its resolving power — is nearly the same as a telescope with an aperture equal to the distance between the telescopes. This distance is termed a baseline. The Y-shaped CHARA Array has 15 baseline configurations ranging from 31 to 331 meters.

The CHARA Array’s large effective aperture, the successful application of leading edge optical technologies, and exceptionally steady atmosphere over Mt. Wilson have produced a number of astronomical imaging “firsts,” including an image of the surface of a main sequence star (Altair) and images of an interacting binary star system with a suggestion of mass transfer between the pair. 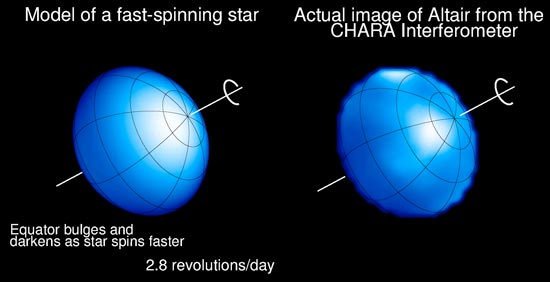 The Altair imagery above is from a University of Michigan News Release that accompanied the publication of the paper “Imaging the Surface of Altair” by Monnier et al., 2007, Science. 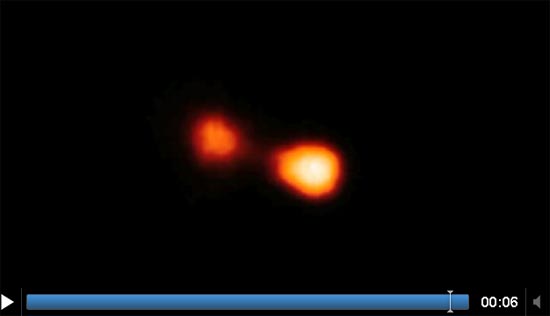 The image above is from a remarkable animation of a sequence of images of the interacting binary star system Beta Lyrae. (Zhao et al. ApJ 684, L95)