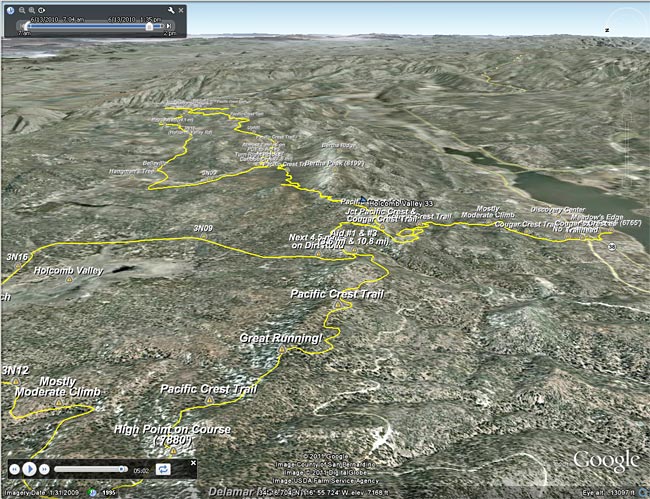 When you’re a middle-of-the-pack runner doing a 33 mile race in the mountains of Southern California you have a lot of time to think. I’d already been running 5 1/2 hours, and what I was thinking about at the moment is that I wished I had spent the last week in Big Bear, Mammoth, or anywhere higher than the soaring 890′ elevation of the west San Fernando Valley.

Why? The Holcomb Valley 33 Mile course is deceiving. Even though it has only one steep climb, and the total elevation gain/loss is only about 3600′, it has the highest average elevation of any 50K in Southern California. Nearly 30 miles of the course are above 7000′, and this translates to a big performance hit, especially for the unacclimated, middle-of-the-pack runner.

In addition to wishing I was acclimatized, I was also thinking that we’d lucked out again this year and the weather for the race was pretty comfortable. It was warmer at the start of the race than last year, and even though the midday temps recorded at Fawnskin were almost identical to last year, it felt a little warmer for most of the run. (The descent to, and climb out from, aid station #6 must be tough on a day in the eighties!)

And besides the altitude and weather, I was thinking it was taking a long time to get to aid station #7. It seemed I should have reached the Belleville miner’s cabin by now. The cabin’s at about mile 26 and only about a mile and a half from the LAST aid station.

Finally, the flat surrounding the cabin came into view. How different that view would have been 140 years ago. At the height of the gold rush Belleville was a boom town of thousands, and as the third or fourth largest town in Southern California had vied for the county seat! Somewhere across the flat was a large western juniper said to have been a hangman’s tree.

Fifteen minutes later I was a happy runner; drinking cola, getting a bottle filled with ice and water, and kidding around with the aid station volunteers from Bear Valley Search & Rescue. They were outstanding — as were all the volunteers!

After thanking everybody for being there, I turned onto the PCT and started to jog up the trail. Even though more than 5 miles remained — more than half of it uphill — it felt good to be on the last leg of the race and headed for the finish line!

Congrats to the overall winners Jorge Pacheco (4:20:13) and Vanessa Jones (5:45:16) and to all the runners that participated in the race. This year the median time (half the runners above, half below) was about 7:38:00.

Here’s an interactive Google Earth flyover of the course that can be viewed in most browsers. (Google Earth plugin required.) Distances specified are based on my GPS trace from last year, and were calculated in SportTracks. Distances and placemark locations should be considered approximate. Here’s an elevation profile from last year’s post about the race.

Many thanks to Gary and Pam Kalina, Bear Valley Search & Rescue, the sponsors, and all the volunteers for a great race! For additional info see the Holcomb Valley Trail Runs web site.