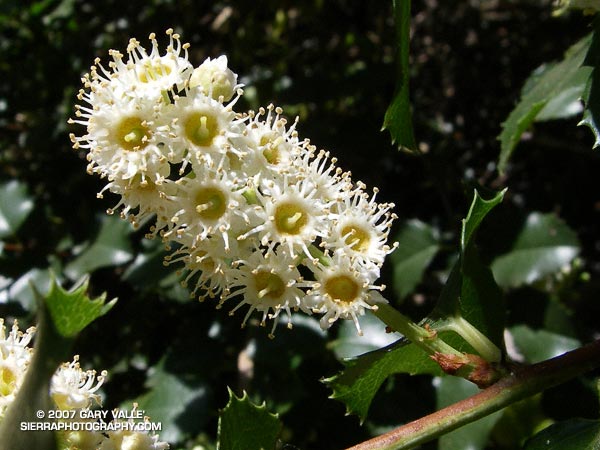 A closer look at the feathery blossoms of the holly-leaved cherry (Prunus ilicifolia) reveal a peculiar flower whose many stamens resemble the tentacles of a sea anemone.

Holly-leaved cherry is a member of the genus Prunus — the same as apricots, peaches, plums and cherries. As is the case with other species in this genus, the seed and leaves may contain hydrogen cyanide. It produces a small, thin-fleshed fruit favored by coyotes.

The photograph was taken on the slopes of Rivas Canyon near Will Rogers State Historic Park, while doing the route described in the post Will Rogers – Temescal Loop. Once again the weather for this (approximately) 21.5 mile loop was post-card perfect. A Google Earth image of a GPS trace of the route is available in the earlier post.