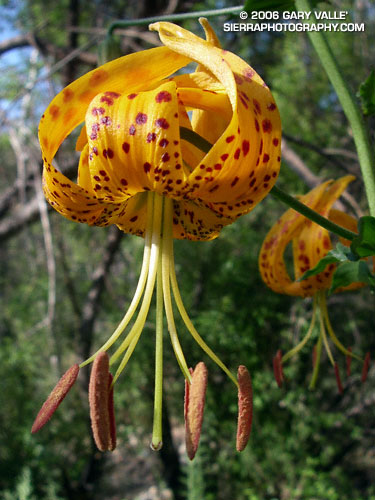 I had been running for nearly an hour, and the heat was oppressive. Following an unusually cool Spring, it had been tough to adjust to afternoon temperatures of nearly 100 degrees. Running from the Victory Trailhead of the Upper Las Virgenes Canyon Open Space Preserve, the exposed “main drag” had been like an oven. The refreshing green hills of Spring had turned a golden brown, and the muddy ruts of a Ranger’s truck had been baked to the hardness of concrete. In Las Virgenes Canyon there had still been a little water in the creek, and I had scooped water into my hat and poured the cooling liquid over my head and down my back.

That had been a couple miles ago. Now the best the stream could do is turn the trail sandy as it snaked along the canyon. Running through the broken shadows of Oaks, Willows and Sycamores, I rounded a corner, and could only exclaim, “Wow!”

If the red of a Snow Plant is startling to see on the forest floor, then seeing the gold and burgundy of a Humboldt Lily (Lilium humboldtii ssp. ocellatum) in a shaded corner of this sizzling landscape is at least surprising. This showy lily is a California native, not an escaped ornamental. It occurs sporadically in shaded canyon bottoms, often near stream courses. Because of its specific habitat, it is relatively uncommon. As a result it is listed in the California Native Plant Society’s Inventory of Rare and Endangered Plants as being uncommon and fairly endangered in California.