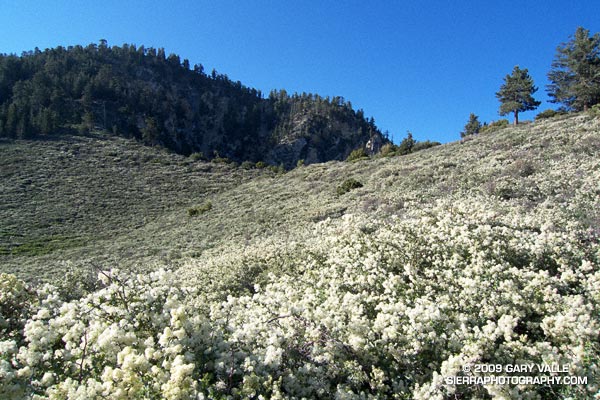 Snowbush on the Pacific Crest Trail near Islip Saddle

Below, the throaty rumble of an almost continuous stream of motorcycles echoes through the canyons. Closed by storm damage since the Winter of 2005, Highway 2 from Islip Saddle to Vincent Gap is open again.

It is also busy on the Pacific Crest Trail. I’m southbound on the PCT, and some of the hikers I’ve talked to are doing the route I’m doing — an out and back from Islip Saddle (6650′) to Mt. Baden-Powell (9,399′). At least one group has set up a car shuttle, and will descend to Vincent Gap after climbing Baden-Powell. 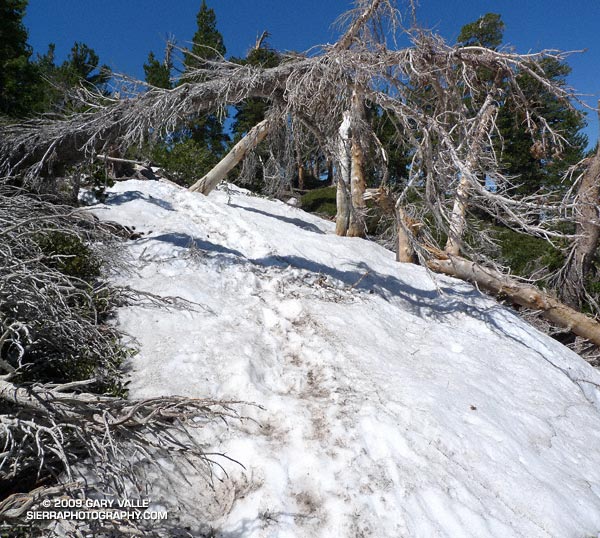 Northbound on the PCT, there has been a mix of youth groups returning to Islip Saddle after a night under the stars, and PCTers on their way to Canada. Nearly 400 miles into their 2650 mile trek, the PCTers look great, and if their broad smiles are any indication, they are enjoying life on the trail.

Whether hiking a couple of miles, or a couple thousand miles, it is great day to be outdoors. The weather is cool, and there is not a cloud in the sky. There are patches of snow here and there, and even some snow on the trail. My legs feel good, and I feel good.

Today I decided to keep things simple. Rather than climb Mt. Islip and other peaks along the way, I’m doing a basic out and back route to Baden-Powell. Even so, it’s no cakewalk. A quick calculation using the topo map gives an honest elevation gain/loss of at least 3600 ft.

Earlier, as I worked my way above Windy Gap, I was surprised to feel and then hear a distant, powerful, rumbling ka-boom! It wasn’t a motorcycle, or thunder — it was Space Shuttle Atlantis landing at Edwards!

With a few stops, and a mix of hiking and running, it takes me about 2.5 hours to get to Baden-Powell. No one is on the summit. Across Vincent Gulch, Mt. Baldy (10,064′) looms in the haze. A few ribbons of snow embellish its north face.

I grab a Clif Bar from my pack, and walk along the ridge, looking at the weather worn trees. After a few minutes, I return to the summit and then descend to the Wally Waldron Tree. For an impulsive moment I briefly debate continuing down to Vincent Gap and doing the South Fork loop. It would “only” be about 7 miles longer, and I’d never done the loop counterclockwise… but instead I hang a left onto the PCT and take the first strides toward Islip Saddle. Maybe next time.

Here’s a Cesium browser View of a GPS trace of the approximately 16.5 mile route.