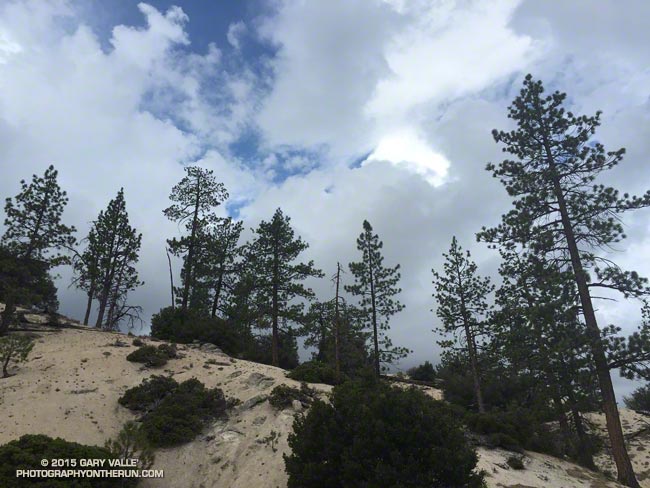 It wasn’t so much a surprise that there was thunder or that it was starting to shower again. It was that I was hearing thunder all around me — to the east toward Mt. Waterman and Twin Peaks, to the south toward Mt. Wilson and the San Gabriel Valley, and to the west toward Big Tujunga Canyon and the San Fernando Valley. This was clearly more than an isolated summer build-up. Pockets of showers, some light and some heavy, could be seen in the distance and I wondered just how wet I was going to get.

The answer was “pretty wet!” That was on a run in the San Gabriel Mountains on Saturday, and was the result of the first wave of moisture and instability associated with tropical system Dolores and a strong monsoonal flow from Baja. An even stronger surge of moisture followed Sunday afternoon with rain rates exceeding an inch an hour. From 5:15 p.m. to 5:25 p.m. a CBS Radio weather station on Mt. Wilson recorded a half-inch of rain in just 10 minutes!

Though the heavy rain created its own problems — including flash floods, debris flows and rock slides — the soaking rains helped quell the Pines Fire near Wrightwood and the North Fire near Cajon Pass. Over the three day period from Saturday to Monday the Big Pines Remote Automated Weather Station (RAWS), near the Pines Fire, recorded 3.12 inches of rain. Several stations in the San Gabriels recorded more than three inches of rain, including Clear Creek and Opids Camp.

Many locations set new records, not only for the date, but for any day in July. Downtown Los Angeles (USC) set rainfall records for the date on Saturday, Sunday and Monday. Downtown Los Angeles recorded 0.36 inch of rain Saturday. This is more rain than any day in any July since recordkeeping began in 1877. That one day of rainfall even broke the monthly record for July in Los Angeles! Prior to this event the wettest July on record was in 1886, when 0.24 inch was recorded.

Strengthening El Nino conditions and the active phase of the Madden-Julian Oscillation contributed to the development of Dolores in the Eastern Pacific, enhancing convection. Anomalously warm SSTs in the tropical and sub-tropical Eastern Pacific also played a role, helping to maintain the strength of Dolores and increasing the amount of water vapor entrained by the system.

This year’s El Nino is very different than last year’s on again, off again event. This year’s El Nino is already established, well-coupled with the atmosphere and growing in strength. It’s firing on all cylinders and at this point it appears the only question is, “How strong will it get?”