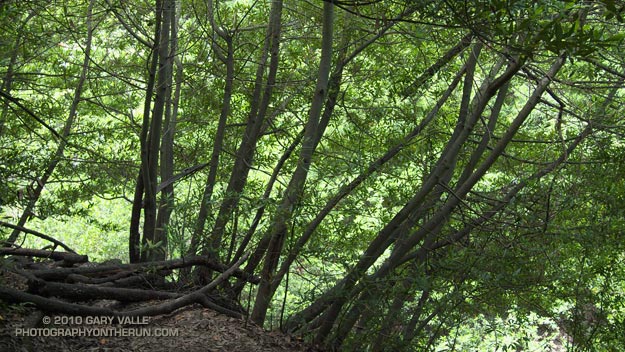 It was about 9:45 a.m., and I was switchbacking up through a surprisingly dense forest of California bay on the Hondo Canyon segment of the Backbone Trail. The trail was carpeted in bay leaves, and a hint of the sharp, sweet smell of bay lingered in the still morning air. It had been four years since I had run this trail, and I had forgotten just how lush and green it was. The geology, oaks, bay trees, ferns, and poison oak were spectacular.

The run from the end of Reseda to Saddle Peak (and back) was going well. The route was a tricky one, and it really helped that I had done it before. Lower in the canyon there had been a misleading Backbone Trail marker, and that was just one of several potential gotcha’s.

Even if you know the way, the run is no gimme. Depending on the route used, its length works out to around 26 – 28 miles, and it has a legit elevation gain/loss approaching 5000′. Throw in the route-finding challenges, and it’s possible to have a long day.

The run starts at Marvin Braude Mulholland Gateway Park, on the San Fernando Valley side of the Santa Monica Mountains. The first leg of the run goes to Trippet Ranch. I usually run the fire roads out to Trippet Ranch, and then take the Musch, Garapito, and Bent Arrow trails on the way back to Reseda.

The most obscure section is between Topanga Canyon and Old Topanga Canyon. From the Dead Horse Trail parking lot, the Backbone Trail starts behind the bathrooms and follows a brushy canyon down to Topanga Canyon Blvd. The trail picks up again across Topanga, about 50 yards west on Greenleaf Canyon Road. The trail is on the left, just before a creekbed, and leads uphill. There are some nature trail markers along the steep trail, and the top of the hill is about a quarter-mile from Greenleaf. From the top of the hill, the trail zigs south and zags west, working down to a dirt road. The route continues across the road and down an overgrown slope to the north side of the water tanks. A trail leads northwest from the water tanks and down to Old Topanga. The total distance from Topanga to Old Topanga is about 0.6 mile.

I was glad to have that convoluted stretch behind me. A few minutes ago I’d reached the top of Hondo Canyon, and turned onto the Fossil Ridge Trail. When the visibility is good, the views along Fossil Ridge and the crest leading to Saddle Peak are excellent. Today the marine layer had been slow to clear, and the tops of the peaks were cloaked in fog. The chaparral plants were so wet that I was able to squeeze a gulp of water from the brush-like flowers of a laurel sumac.

After about a half-mile on the Fossil Ridge Trail, I emerged from the chaparral, turned left on Topanga Tower Mtwy, and ran down to the popular overlook at the junction of Schuerren, Stunt, and Saddle Peak roads. Here I continued west across the highway and scrambled up to a ridgetop trail that leads to a big water tank. From the water tank it’s about  0.3 mile up the trail to the turn-off to Saddle Peak, and then another 0.4 mile to the summit. The western peak (2805′), the one with all the communications equipment, is the high point.

Keeping in mind that GPS traces are not exact, and the route I used isn’t necessarily the “official” or “best” route, here’s a Google Earth interactive view of a GPS trace of my 27.5 mile route.