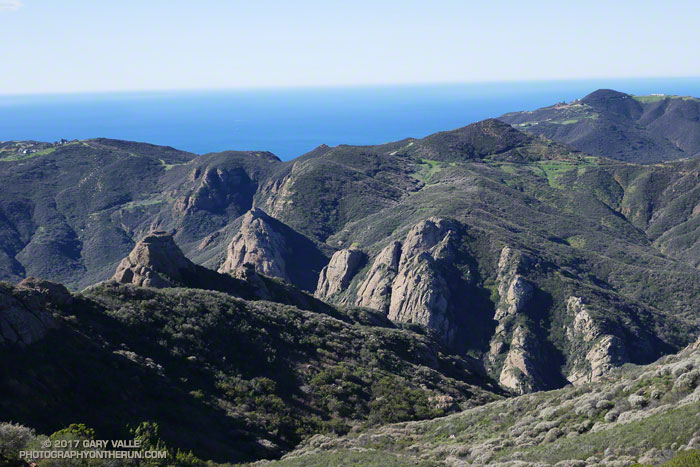 As I rounded the rib extending down from Peak 2658 — the site of the old Triunfo Lookout — I peered down into the deep canyon of the West Fork Arroyo Sequit and the towering rock formations above the Grotto. As is the case along many sections of the Backbone Trail the view was superb.

Earlier, from the Etz Meloy fire road, Anacapa and Santa Cruz Islands had seemed to be magnified by the ocean haze — the lighter-colored rocks of San Pedro Point clearly visible on the east end of Santa Cruz. To the south, Santa Barbara Island, the smallest of the Channel Islands, had been visible near the horizon.

I was doing an out and back run on the Backbone Trail from the Kanan Road trailhead, and wondering if I had enough water to go to Mishe Mokwa and then the 15 miles back to Kanan. The irony was that, following several years of drought, this Winter it had rained and rained. Water was everywhere, but I had not thought to bring a UV pen or filter.

Reaching the point where the trail turns to the north and has a great view of Sandstone Peak, Circle X and the Mishe Mokwa trailhead I again debated turning around. Across the canyon, sunlight gleamed from the cars parked at the Mishe Mokwa Trailhead. The rocky knolls below the trailhead were green with rain and though I couldn’t see them from here, would be covered with a spectacular patchwork of purple and yellow shooting stars.

Hmm… I’d run a little over 13 miles, so Mishe Mokwa was less than two trail miles away. Going there would add about 3.5 miles to my run.  I lifted my pack to see how much water I had left, and then continued down the trail.