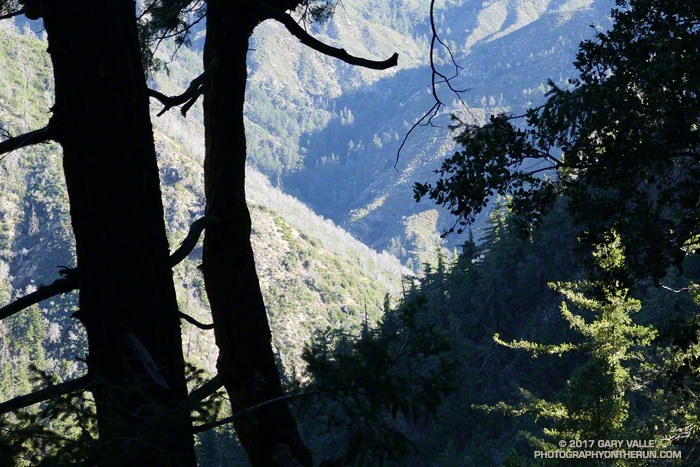 The photograph above was taken a little more than a mile from the top of the Kenyon Devore Trail, in the San Gabriel Mountains, near Mt. Wilson. The deep canyon seen through the trees is Strayns Canyon, which the trail follows on its way from the West Fork San Gabriel River to the shoulder of Mt. Wilson.

Today, I’d run down the Kenyon Devore and Gabrieleno Trails to West Fork and then up the Red Box – Rincon Road to point on the map marked Camp Ah-DA-Hi. (A former Woodcraft Rangers Camp.) With hot weather forecast next Saturday for the Mt. Disappointment 50K, I’d been glad to see the small streams that had been dry during the drought were running again.

Trails have stories to tell and when I run or hike a trail I’m always curious about its history. A trail between the West Fork San Gabriel River and Mt. Wilson is shown in the 1:62500 1897 edition of the USGS 1894 Los Angeles Sheet. Like many trails of the era, it followed a ridge, in this case a ridge just east of Strayns Canyon.

The first USGS map to show a trail along Strayns Creek was the 1:24000 1934 Mt. Wilson Advance Sheet. The trail remained unnamed in USGS maps until the 1966 edition of the 1:24000 Mt. Wilson Quadrangle, when it was labeled the Rattlesnake Trail. The trail was renamed the Kenyon Devore Trail in the 1995 edition of the map in tribute to Forest Service patrolman, hydrographer, and Angeles National Forest volunteer, Kenyon DeVore.

The Kenyon Devore Trail is part of the Mt. Disappointment 50K course. It is one of several trails maintained by runner-volunteers under the guidance of Forest Service volunteer and Mt. Disappointment Race Director, Gary Hilliard. Today, as I was on my way back up to Mt. Wilson, I ran into Gary and two volunteers cutting logs from the trail in preparation for next Saturday’s event.

The grueling 5 mile, 2650′ climb from West Fork to Mt. Wilson on the Gabrieleno & Kenyon Devore Trails comes at about mile 26.5 of the 50K and is the highlight of the run.

I have to laugh about what happened on the Kenyon Devore climb one hot year. I’d jammed my Camelbak(TM) with so much ice at the West Fork aid station that when water was added, it melded and froze into one large chunk. I didn’t discover this until about halfway up the climb, when I ran out of water. You can’t drink a chunk of ice and even at 90 degrees, the ice was melting at an agonizingly slow rate. At best I could only get a minuscule sip of water from the pack every few minutes, and it nearly imploded from my efforts.